Hummus is one of the superheroes in my vegan life – it’s always there in a pinch, providing sustenance, simplicity, and flavour when and where it’s most needed.  Like a lot of great food, it originates in the Middle-East (Levant) and has been a staple there for centuries.  An interesting aside, in a region that is well known for its conflicts, one of the less known disputes is the “Hummus War” – an on-going culinary battle over who holds the proprietary rights, and who makes the best and biggest Hummus.  Lebanon, with it’s 23 000 pound Hummus, currently holds the record for the biggest.  As to who makes the best – well, let’s just say it’s probably all delicious.

Despite this dispute, Shooky Galili, who runs the very thorough Hummus Blog, enthusiastically believes that Hummus has the power to unite the Middle East:

“If you enter any good hummus restaurant in this region, you will see Jews and Muslims, Palestinians and Israelis sitting at the same table, eating the same food. I think in the end this rivalry will show that we in the Middle East have far more in common than the things that divide us.”(http://www.cnn.com/2010/WORLD/meast/05/09/lebanon.hummus/index.html)

If you’ve only had store bought Hummus, I strongly recommend making your own from scratch.  It’s only a handful of ingredients, is cheaper to make yourself, and you can experiment with the chickpea to tahini ratio, and adjust it to your own taste.  Also, this recipe is not to imply that you can improve on the perfection that is Hummus, but one of its best qualities is how easily it can be accessorized and that it goes so well with so much.

Directions
1. Make the Hummus.  In a blender or food processor, combine the cooked beets, chickpeas, olive oil, tahini, lemon juice, garlic, and salt.  Pulse into smooth.  Set aside.
2.  Over low heat, cook the tempeh in frying pan with the 1 tsp of olive oil.
3.  Toast the Bread.  Pre-heat the oven to 350 degrees.  Slice the bread and arrange the slices on the oven rack.  Cook until slightly browned.
4.  Spread a generous amount of the Hummus on the toasted bread, top with the tempeh, sprouts, and seeds.  Enjoy! 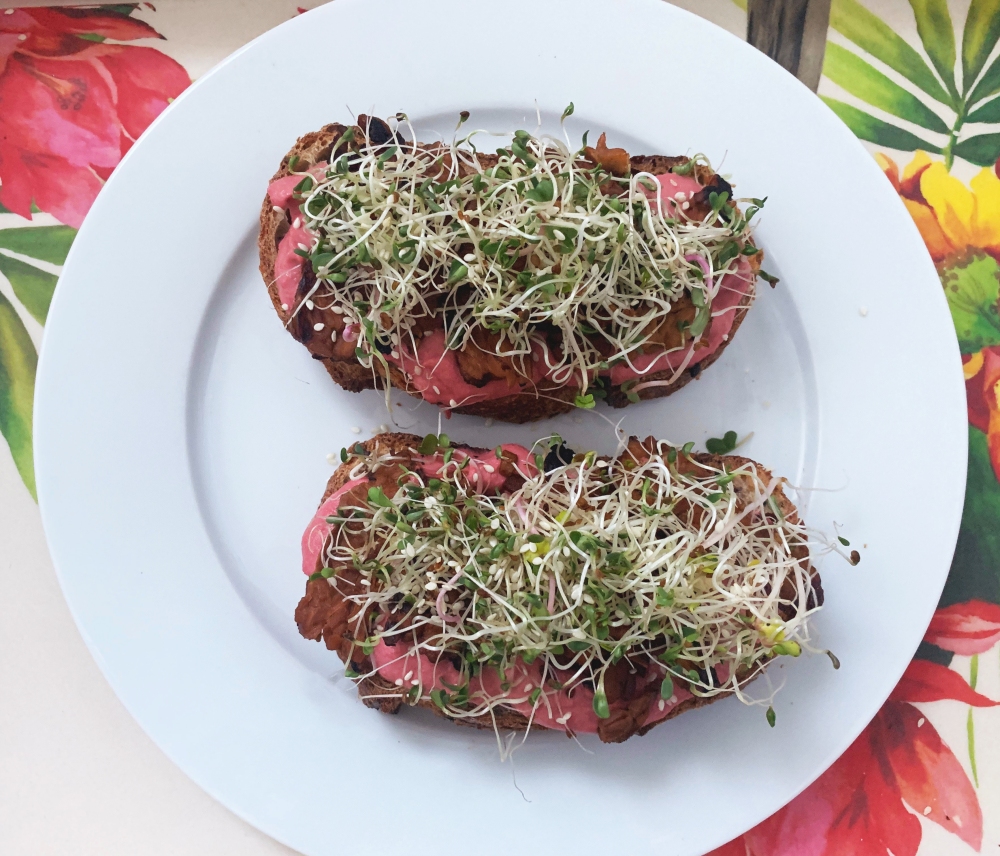