Have you ever had the experience of trying a particular food for the first time and wondering why you haven’t been eating it your whole life?  That was my experience with Radicchio. I’d see it in the grocery store, sitting in the produce bins, all shiny, fresh and red hued, and passively acknowledge its existence, it’s popularity, but somehow it never intrigued me enough to actually try it.  It was only recently, in the last year, that I finally decided to give it a go, and well, I love it, and have been eating it regularly since then.

Radicchio isn’t exactly the most adventurous food, but discovering that I really liked, served as a reminder of just how rewarding trying new foods can be.  I’ve also recently developed an aversion to salads made with soft greens like spinach, and arugula. Maybe it comes from eating them too frequently, but regardless, the texture just doesn’t cut it for me anymore.  This radicchio salad has just the perfect amount of crunch, especially once you add the bell peppers and radishes.  With the addition of the BBQ chick’n and chickpeas, this salad also becomes a full and very heart meal.

Ingredients:
For the BBQ seitan chick’n and chickpeas:
1 cup of wheat gluten flour
1/4 cup of nutritional yeast
2 tsp of salt
2 tbsp of tomato paste
1 tbsp of rosemary
1 tbsp of apple cider vinegar
1 tbsp of olive oil
1 tsp of cumin
1/2 cup of water
1 398ml can of chickpeas
1/2 cup of BBQ Sauce (I used Neal 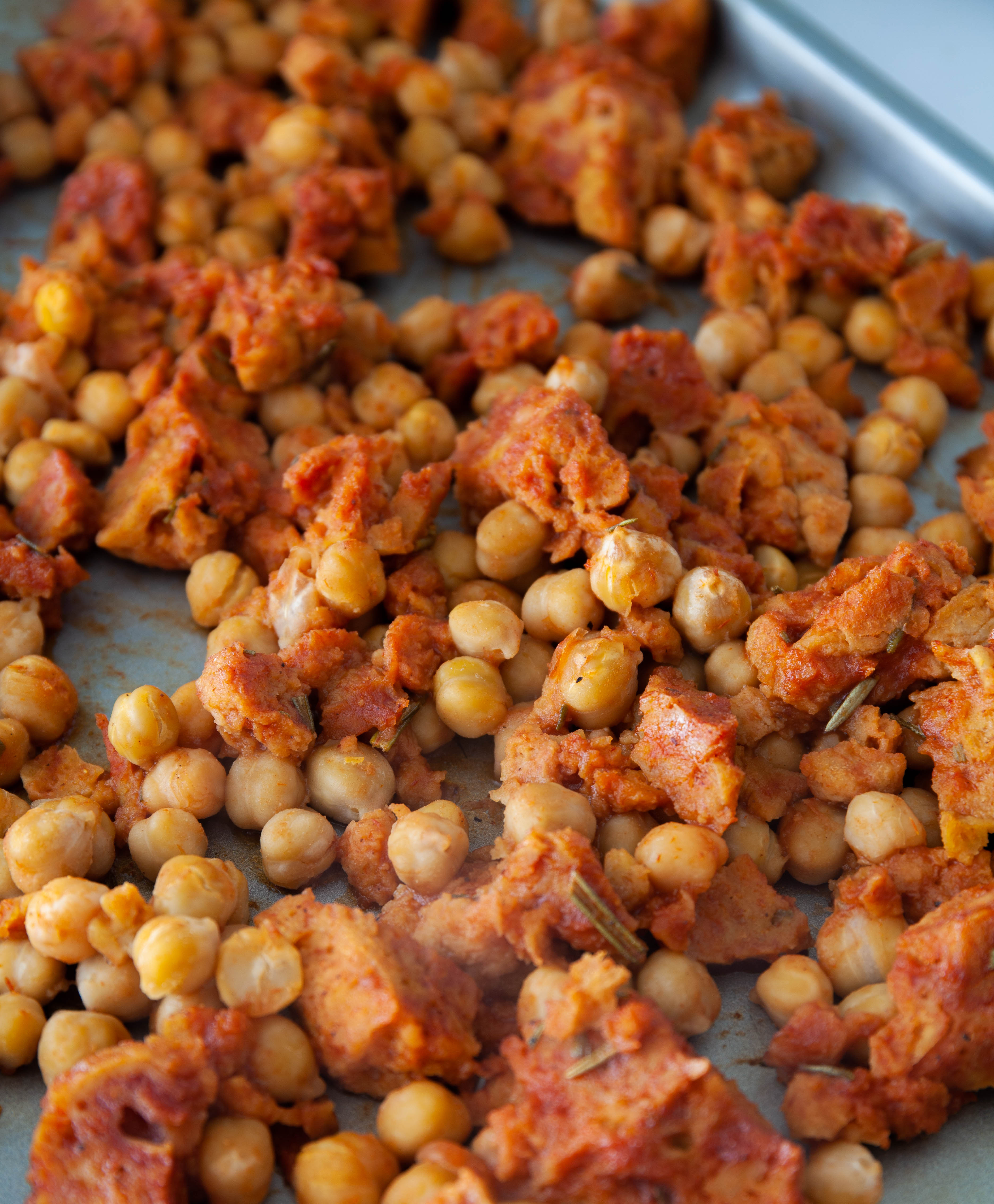 Directions:
1.  In a large mixing bowl, mix together 1 cup of wheat gluten flour, 1/4 cup of nutritional yeast, 2 tsp of salt, 2 tbsp of tomato paste,1 tbsp of rosemary, 1 tbsp of apple cider vinegar, 1 tbsp of olive oil, 1 tsp of cumin and 1/2 cup of water.  You can use a food processor in this step, which makes the mixing a bit easier, but it is not necessary.  Use your hands to finish forming the dough and then separate it into two.
2.  Bring a large pot of water to a boil.  Reduce to simmer, and add the dough. There should be at least enough water to cover the dough.  Cover and cook for 45 minutes.
3. Prepare the salad.  In a large bowl combine the chopped radicchio, diced tomatoes and bell pepper, and radish slices.
4.  Prepare the dressing.  In a small bowl, add 1 cup of vegan mayonnaise, 2 tbsp of yellow mustard and mix together until smooth.
5.  Preheat over 350 degrees F
6.  Removed the cooked seitan from the water and chop it into smaller, even sized chunks. You may want to let it cool before doing this.  In a large mixing bowl, mix together the chopped seitan with the 398ml can of chickpeas and the 1/2 cup of BBQ sauce
7.  Lay the mixture out on a baking sheet and cook for 20 minutes at 350 degrees F.
8.  Add everything together and enjoy! 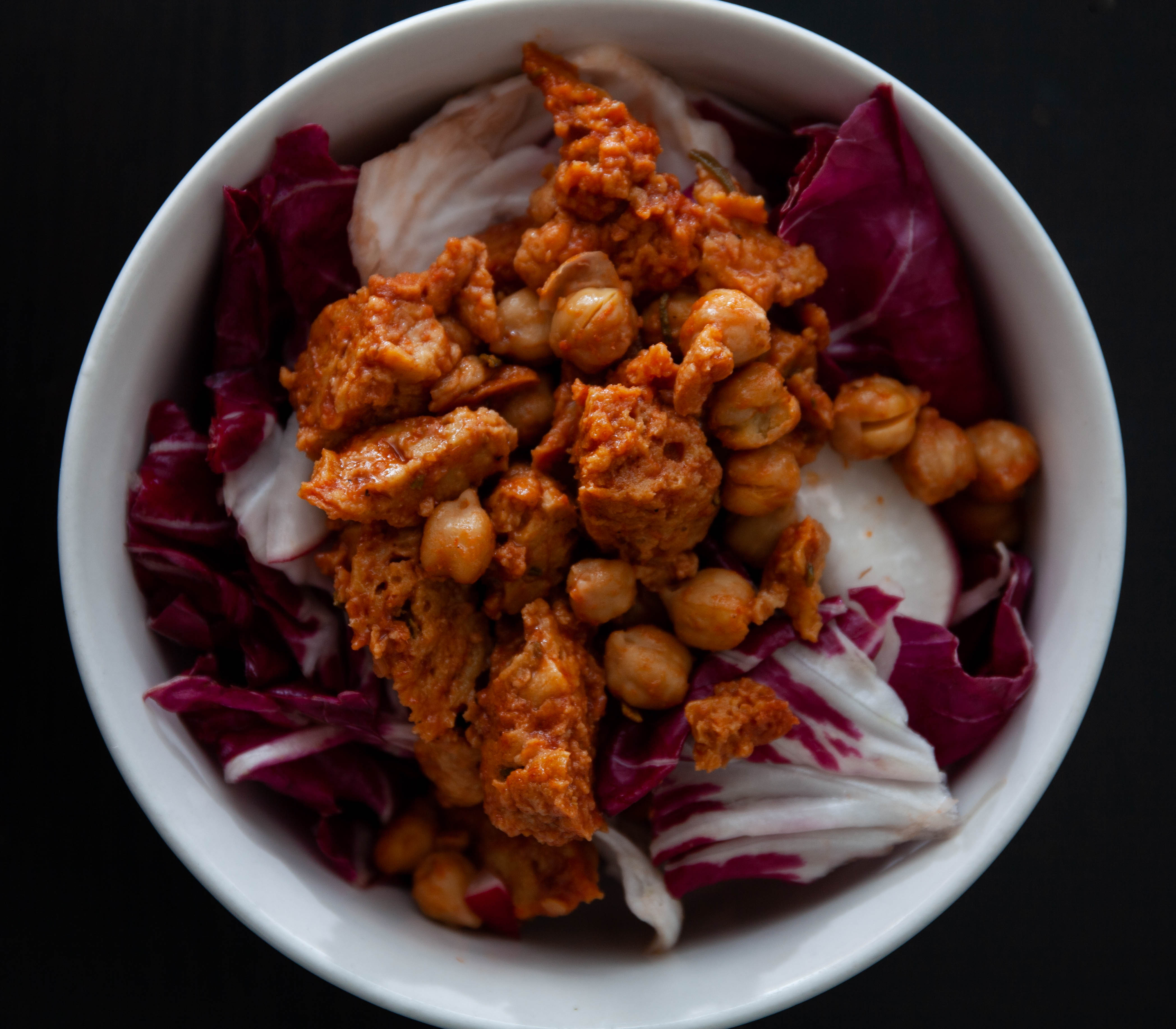