As of this past Monday, Toronto is back in a COVID lockdown.  Our case count in Toronto, in Ontario and in much of Canada, is wildly out of control.  Unfortunately, despite knowing full well there was a second fall/winter wave coming, and that it would likely be much worse than the first, our provincial government seems to have done little to prepare in the ten months since this began.  And so here were again, clinging gratefully to what meager dwellings we have to safely shelter in (whist also a housing crisis continues to rage).  I haven’t been leaving my house much at all other than for work even when restrictions were loosened and while that obviously has an impact, I’m still grateful that I can stay at home as much as I have been.

So, this means it’s time again to turn to stress baking to ease the days and nights.  During the first lockdown, I binged my way through nine seasons of The Great British Bake Show, which with its light and gentle touch, an endearing line of bakers, an impressive array of baking challenges and beautifully shot results, quickly became my go to comfort.  It is also inspired me to try and become a better and more versatile baker.  GBBS has also introduced me to a whole slew of new desserts, breads and sweet and savory delicacies that I didn’t know existed.   Many of them are far beyond my skill level but I’m working my way up.  Lately I have been focused on finessing my yeast skills, which led me to develop a recipe for one of my favourite desserts, Cinnamon Rolls.  I also find Cinnamon Rolls to be well suited for winter consumption – especially when they’re served hot, straight out of the oven – and while Toronto’s first major snowfall melted away quickly, I have no doubt it will return with a vengeance.  I will be ready though, with plenty of Cinnamon Rolls on hand! 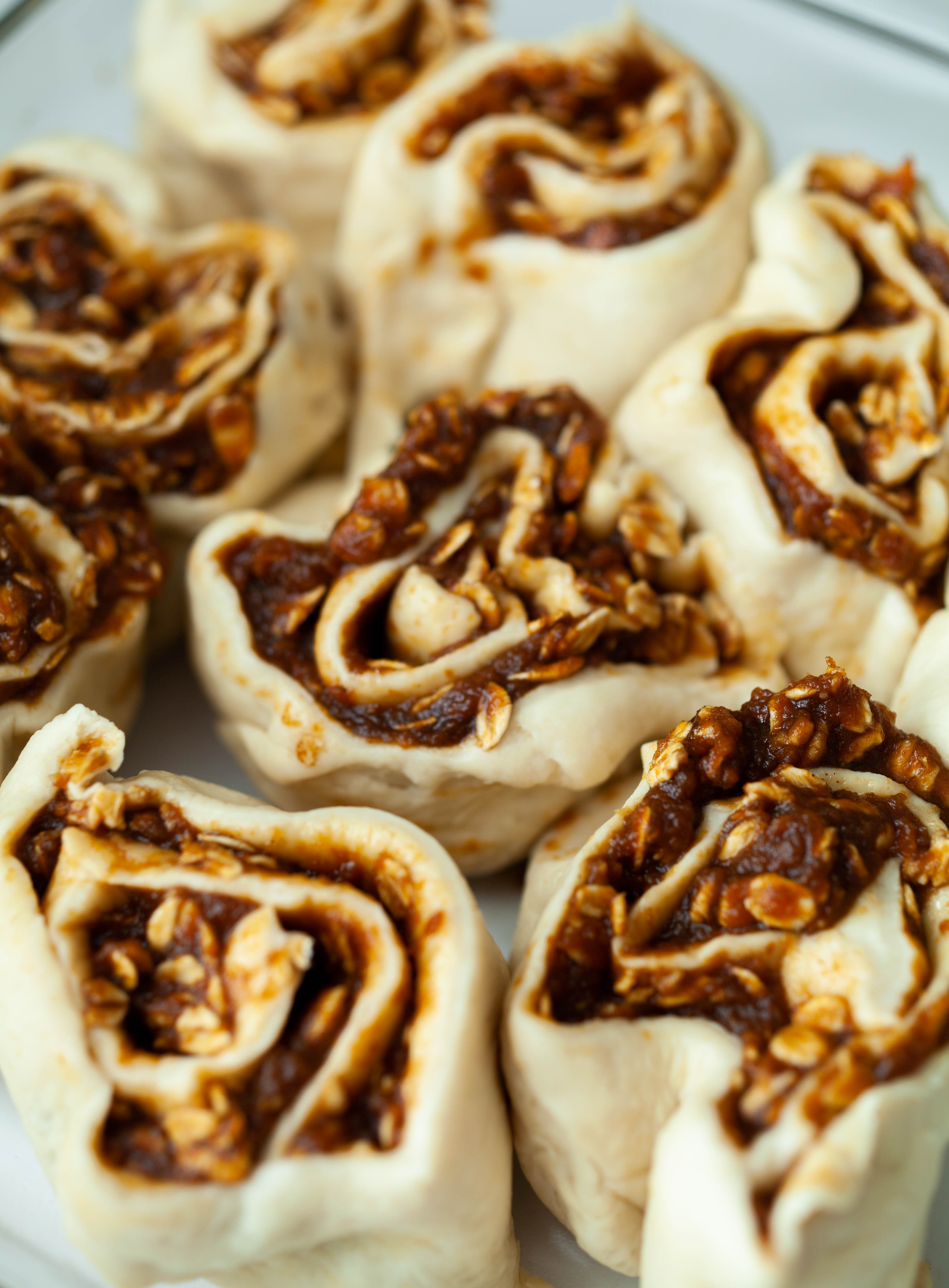 Directions:
1.  Make the dough.  In a large mixing bowl, mix together 3 cups of flour, 3 tsps of instant yeast, 1/2 cup of water and 1 tsp salt.  Salt can inhibit the growth of the yeast so add to separate ends of the mixing bowl.  Add 1 cup of water and form a wet dough with your hands.
2.  You can let it rise overnight, or for a faster rise, turn on the oven to 350 degrees F and place the bowl on top of the oven.  It should be fully risen after about 90 minutes, but punch it down a couple of times throughout the rise.
3.  Make the filling.  In a medium mixing bowl, mix together the 1 cup of pumpkin, 1 cup of brown sugar, 1 tbsp of cinnamon, 1 tsp of nutmeg, 1 tbsp of molasses, 1 tsp of vanilla, and 1 cup of oats.
4.  Roll out the dough on a lightly floured surface.  Once the dough is risen, use a rolling pin to roll the dough out into a large rectangle.
5.  Scoop the filling onto the dough and use a knife to spread it out even across the surfaces.  To stop the filling oozing out too much when you roll the dough, avoid putting any around the edges.
6.  Roll the dough.  Using both hands fold over the dough onto itself to form one long roll.  This can be tricky but go slow and try to roll it as tightly as possible, then slice the roll into small sections.  You should end up with 6-8 rolls.
7.  Pre-heat the oven to 350 degrees F.  Place the rolls face up in an 8 x 8 baking dish.  Place in oven and cook for 25 minutes.
8.  Prepare the Icing.  In a bowl mix together the 1 cup of icing sugar, 3 tbsp of plant-based milk, 1 tsp of vanilla.
9.  You can add the icing as soon as you take the rolls out of the oven, but I like to ice them at about the twenty-minute bake mark, and them put back in for the additional five minutes.  This gives you some nice crystallization of the sugar. 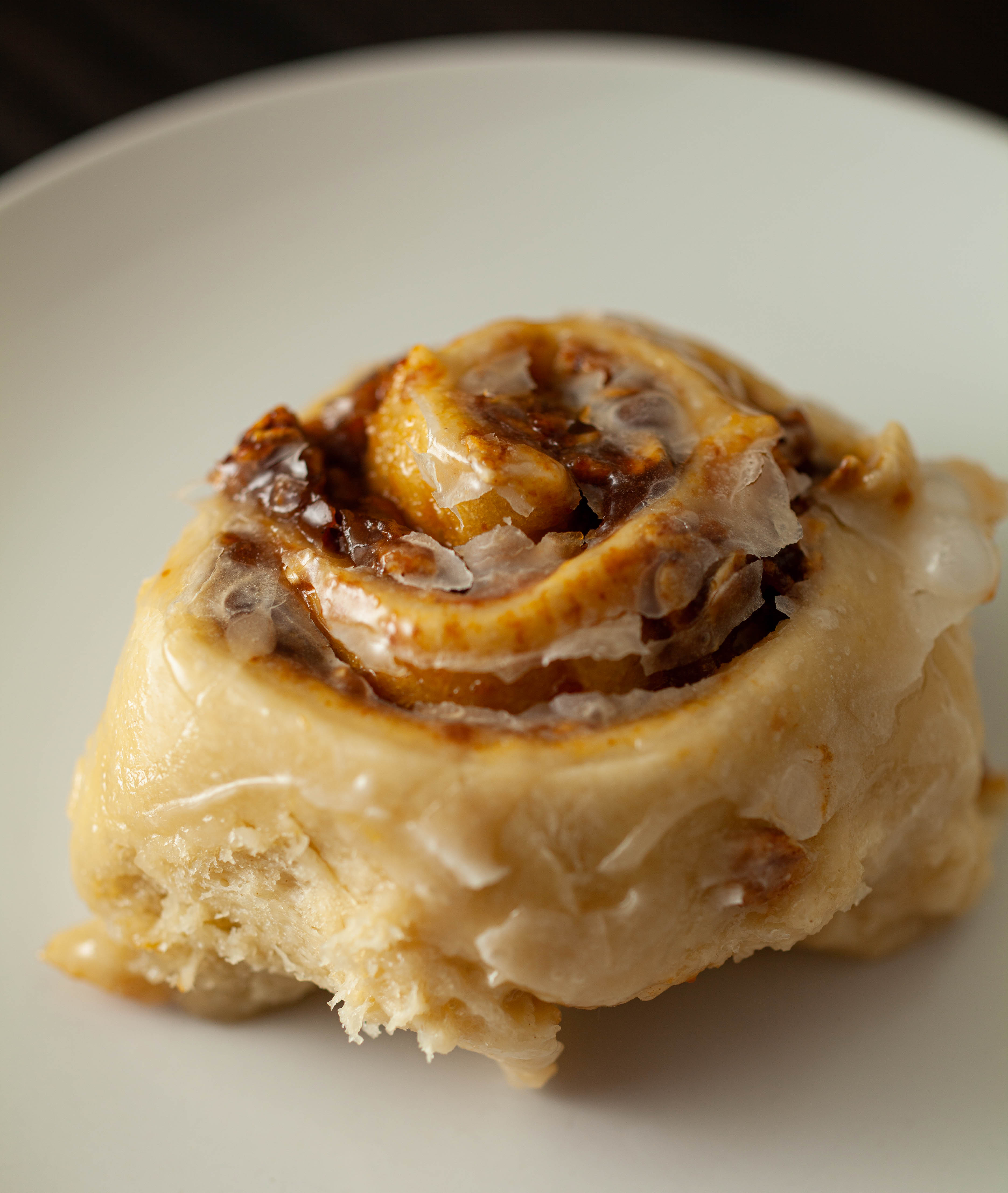