A couple of weeks has passed since the 33rd annual Toronto Vegetarian Food Festival, and as the thrill of the festival has now subsided, and the food hangovers have mostly been cured, I thought I’d give a small summary of the many vegan treats, delicacies, and innovations that I had the opportunity to indulge in.

Like the Canadian National Exhibition, Veg Fest, for me, will always be associated with the end of summer.   For many vegans and vegetarians, Veg Fest also evokes a Christmas-morning-like anticipation, but that delight, I believe, is about more than the experience of eating a lot of good vegan food – it’s also about the atmosphere and the celebratory ambiance of the festival.  The Harbourfront Centre is the perfect venue for Veg Fest. Positioned right on the shore of Lake Ontario, the open air market grounds provides a huge space to wander and relax,  and even when the festival does get a little crowded, you have the option and luxury of taking a walk along the harbour with your Polenta Poutine, and it’s relatively easy to find a quiet spot near the festival,

My appreciation of Veg Fest has only grown with contrast to the relatively new and popular Vegan Food and Drink Festival that happens every August.  I have faithfully gone to this festival as well, though never without a heavy amount of regret.  As a vegan, I want to support it – I really do, but there’s no denying it after this year’s crass, chaotic showing at Fort York – it’s terrible event, and gets worse every year.  The vibe at the Vegan Food and Drink Festival could not be more different than Veg Fest.  It’s not a celebration – it’s an obnoxiously loud and crowded, absurdly over-priced, cash grab.

For those who aren’t in the know about Veg Fest, admittance is free.  It’s put on by the Toronto Vegetarian Association, a not for profit organization that works to raise awareness about plant-based eating.   The festival itself runs largely on the hard work of a dedicated group of volunteers.  The food, of course, is not free, but there’s typically a lot of free samples to wet your palette.  It also runs for three days so you can spread out your indulgence over 72 glorious hours.   And, yes, I always go all three days 😉

To start off my veg fest experience, I headed to Globally Local’s food truck, where they were dishing out their double stacked Local Famous Burger and a Chickchickun sandwich.  Globally Local is based out of London, Ontario and advertises itself as Canada’s “first all vegan fast food restaurant.”  At $8 for either, this was one of the best deals at the fest.  I tried the Local Famous Burger and it was quite good.  In all honesty, veggie burgers often tend to be a bit on the dry side, especially ones that are nut, legume or chickpea-based, as this one was,  but the patty was surprisingly moist and had an excellent texture.  Even though it was a large, hearty burger, I didn’t feel weighted down afterward.

I can’t even describe how much I love Doug McNish’s Polenta Poutine.  I first tried it at last year’s festival and was blown away by the dish.  It was also the first time I’d eaten polenta, and since then I’ve gotten hooked on the stuff and have been regularly adding it to my staple dishes.  Polenta seems to work with just about everything.  Thanks for the continued inspiration Doug McNish and, of course, for the delicious food!

I remember sampling some of Bloomer’s marvelous baked goods at veg fest way back when before they opened their Bloorcourt location.  Their tender, sweet donuts, cookies and other baked goods won my heart.  If the small selection of tasty treats at their booth wetted your appetite, you should make a point of visiting their restaurants.  They have a full menu (not just desserts!) and it is some of the finest vegan food in all of Toronto.  I tried the coconut bacon donut.  I actually don’t like coconut bacon, so I’m not sure what drew me to this particular option, but the donut was nevertheless delicious.

Somehow I was still not feeling full after the burger, poutine, and the donut, so I wandered over to the Cosmic Treat booth, which was tucked away on a separate mezzanine on the east of the Harbourfront building.  That was the one part of the fest that was a bit off – there was a small group of booths that felt separated from the rest of the festival.  The bonus of that, of course, was that there wasn’t much of line.  I tried Cosmic Treat’s Chocolate PB Rice Krispy square.  It was super decadent, but not overly sweet and had a wonderful, smooth texture.  It was honestly one of the best desserts I’ve had in quite a while.  I re-visited the booth on Saturday to get some ice cream, as they also have some of the best vegan ice cream in Toronto!  Like Bloomers, their restaurant in Kensington Market offers a full menu – and the food is excellent!

Saturday seemed like busiest and most crowded day of the festival.  The line-up started early.  It’s pretty exciting to see the popularity of this event grow every year.  There’s more vegans, more veg-curious folks, and more food options.  I almost didn’t mind waited 45 minutes for tacos.

D – Beatstro is a cafe and event space in Bloordale Village.  This is, I believe, their first time at Veg Fest, but hopefully not their last.  They had a solid showing, with a mix of sweet and savory menu options.    I tried the Jalapeno and Lime Marinated Seitan Tacos. They were little sparse on the stuffing but at 6 dollars, it was still a pretty good deal, and the ingredients were of a pretty high quality.  The tacos themselves were excellent – warm, tender, with just a bit of crunch and the seitan, had an excellent texture and flavour.  I also had one of their rainbow sprinkled donuts (classic and always a fave) which was fantastic. 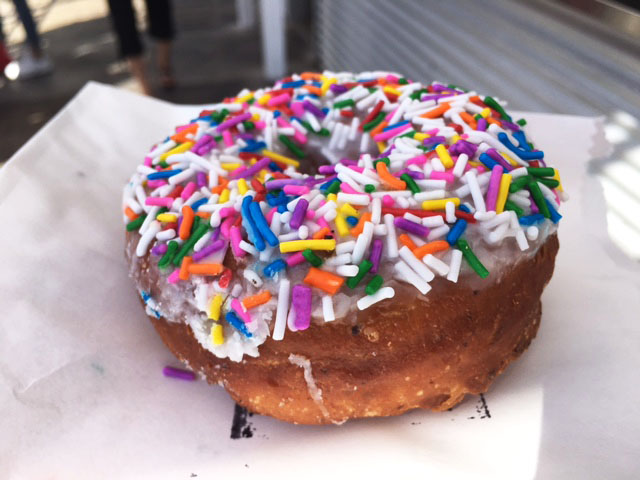 Rescue Dogs have been really hustling since they started the burst out on the scene in 2015 with their creative quirky vegan editions of classic hot dog and street fare.  They are based in St. Catherines, but their mobile food cart has been circulating farmer’s markets and festivals all over Southern Ontario.  They were slinging out those dogs at veg fest crazy fast.  There was a huge line and I still got my Classic Rescue Dog within minutes.   They also use really high-quality ingredients that, whenever possible, are locally sourced, and a portion of all sales go to local animal rescues!

The biggest hit of the festival was probably BRGR KVLT.   The newest and biggest burger lords on the block brought their massive, glutinous, topping heavy masterpieces to the veg fest for the first time, and they were a smash.  From the inventive vegan overlords at Apiecalypse Now, BRGR KVLT continues their agenda to bring the most delicious, sometimes outrageous, and very accessible vegan food to the masses with their characteristic sense of warmth and humour. 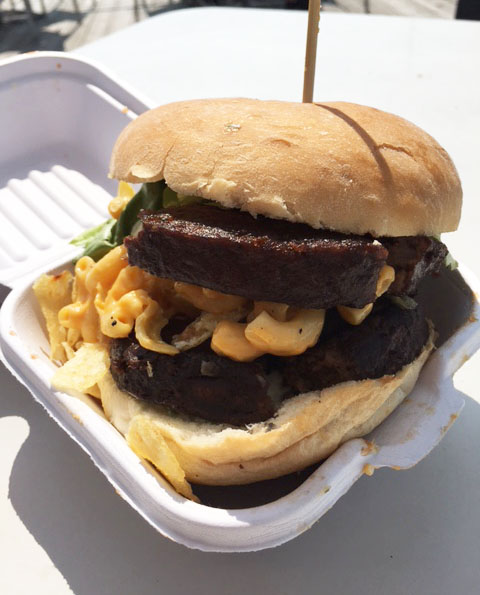 I really like their mission statement from their website and it aligns with my own opinion about veganism – “Vegan isn’t a trend for us. It isn’t a moment. We are all dedicated completely to an ethic of harm reduction, while still having a really fun time selling everyone super ridiculous vegan junk food. Just because it’s vegan doesn’t mean it’s salads. And even if it is salads, so what?! Eat what makes you feel good. Eat what makes you happy–and think about ways that you can go through life causing the least suffering possible. A lot of great things can happen when you step outside your comfort zone, and we like to think we are one of those things for a lot of people who never thought they’d be eating a vegan burger, by choice, on a weekend. Be kind to yourself. Be kind to each other. Life is too damn short.”

The burger was, of course, fantastic – not at all dry and exploding with favour.  It was, unfortunately, a little cold by the time I got it.  I didn’t mind that much – I still gobbled it up, but I can imagine that this burger, served piping hot, fresh off the grill, would be unreal.

As I left the festival on the third and final day, I grabbed a classic cinnamon bun from Tori’s Bakeshop for the road – it was fittingly sweet way to end my Veg Fest experience. 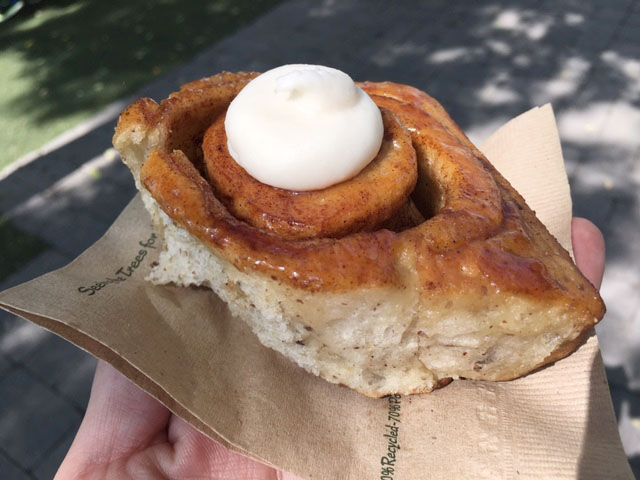