It’s odd that I’ve never been to Montreal before.  It’s only a 5-hour train ride from Toronto (or a one hour flight).  At times, I admit I’ve felt a bit apathetic towards exploring Canada more.  There is a temptation to unfairly define and assess the entire country based on the qualities of its largest city, Toronto.  I don’t like to be negative about a place that has been my home for the past 13 years, but Toronto has a reputation for wearing people down.  Poor and expensive transit infrastructure, a worsening housing crisis, terrifyingly high rental costs, a questionable approach to urban planning, incessant and poorly vetted construction and just the general chaos of a metropolis swelling beyond its capacity – it all wears you down after awhile.  I think I, in my jaded and weary urban mindset, thought that another major city within the same the country, and relatively close by, couldn’t be that drastically different.  But Montreal is its own distinct beast.

Aside from the cultural Quebecois/French distinction, the city has a unique pulse, and a  vibrant sprawl, full of lovely and unique pockets.  It’s a city designed with care and consideration for its citizens, with a wealth of well-maintained parks and public spaces, a well thought out and thorough system for cyclists, and an efficient transit system.  There is an obvious difference between visiting a city as a tourist and living there, but Montreal consistently ranks high on polls of the most liveable cities, and it’s residents are noted for loving life and being pretty damn happy for the most part.  It was palpable, even in my short stay there.

Nearly every restaurant has a patio or outdoor eating/drinking space of some kind.  Yes, Toronto/Ontario take note and tell your bureaucrats and policy makers to chill.  If you have to endure months of brutal winter weather, we want to be outside in summer, and we want to drink and enjoy life under the sun.

There is a lot to do, to see and to eat – more than enough to justify repeat visits.  I think I managed to see a lot for a short trip.   A few highlights:  Old Montreal, the Latin-Quarter, Mont-Royal, Ile Notre Dame and Ile Saint Helen’s, Parc Jean-Drapeau, Mont-Royal, Botanical Gardens, the Contemporary Art Museum of Montreal, the Montreal Museum of Fine Arts, and the Notre Dame Basilica.

Despite a dedication to decadent meat heavy gastronomy, Montreal is a paradise for vegetarian and vegan foodies, and there is just as much creativity and care being put into the preparation of plant-based dishes.  Though Quebec’s official language is French, and it certainly helps to navigate the city if you know a bit of French, most Montrealers are bilingual and the restaurants I went to happily either offered a menu in English, or assistance with translation. 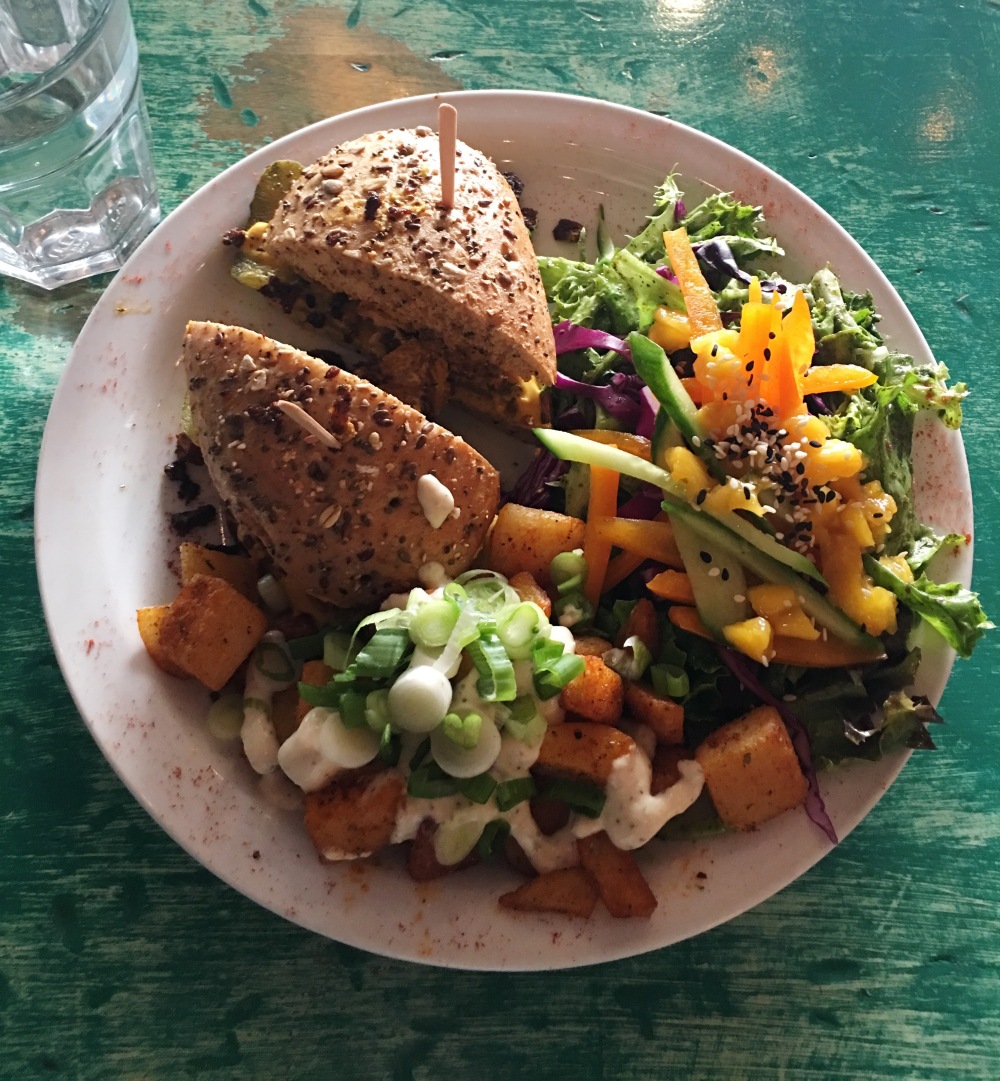 A beautifully designed bistro in the Hochelaga-Maisonneuve borough, Antidote serves a classic lunch/brunch menu with well-priced burgers, sandwiches, wraps, and salads.  I had the “Smoked Meat” Sandwich, with fries and salad.  This was probably the best meal I had while in Montreal.  The sandwich was delicious, the salad was full of fresh ingredients and the fries were cooked to perfection 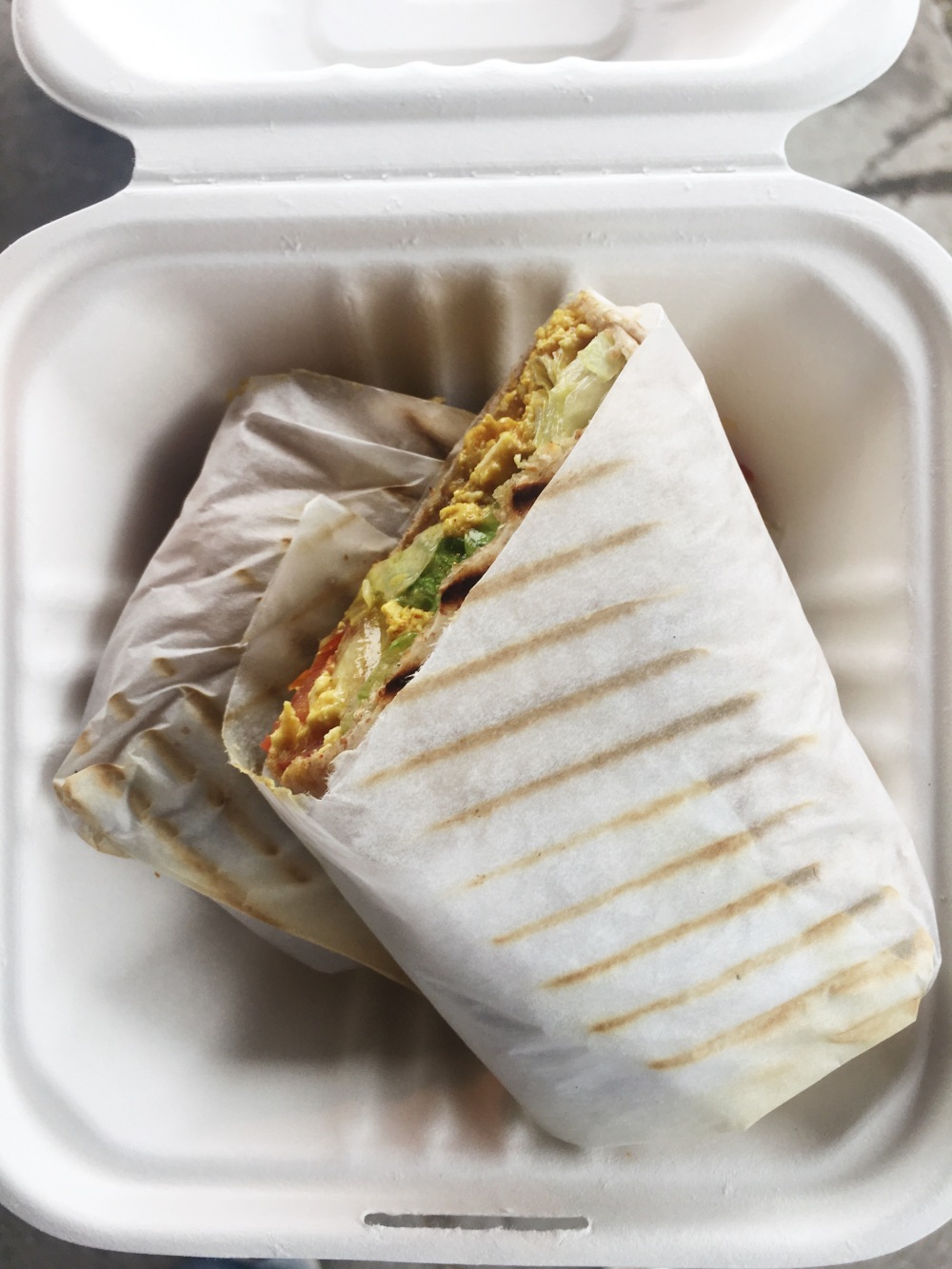 I’m a big fan of Gusta Food’s product line so I made it a priority to visit their storefront, where in addition to selling their various sausages and cheeses, they have a small, but enticing cafe menu for sit-in or take-out.  I had the breakfast burrito – tofu scramble, Gusta breakfast sausage and cheddar, lettuce, tomato, with their homemade Caesar dressing.  At $6 it’s quite the deal.  Also, I have to mention that this was one of the best tasting tofu scrambles I had from a restaurant – no weird, soggy texture or inappropriate spices.  If you’re looking for a nice walk after your meal, Jean-Talon Market is right next door. 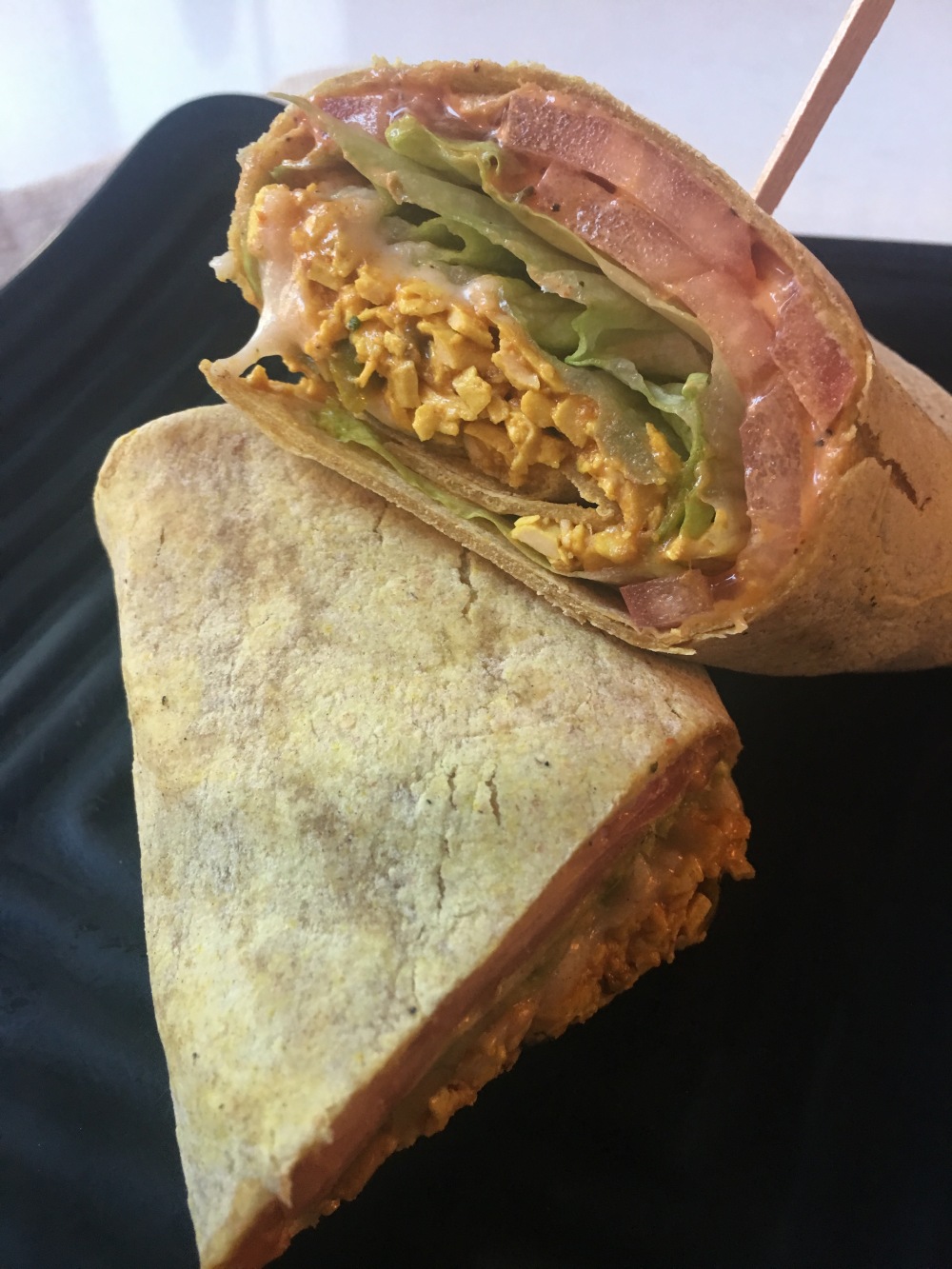 Yes, Toronto has a Copper Branch, but a meal there will cost you close to $20. Copper Branch was my go-to in Montreal for a quick, affordable, nutritious and delicious meal.  There are multiple locations conveniently scattered around downtown, so no matter where you are there is usually one close by.  In my several visits, I tried the Aztec bowl, the shiitake teriyaki burger, the southwest wrap scramble, the bacon maple tempeh sandwich and a key lime square.  The Aztec bowl was probably my favourite, but all the food was of very high quality. 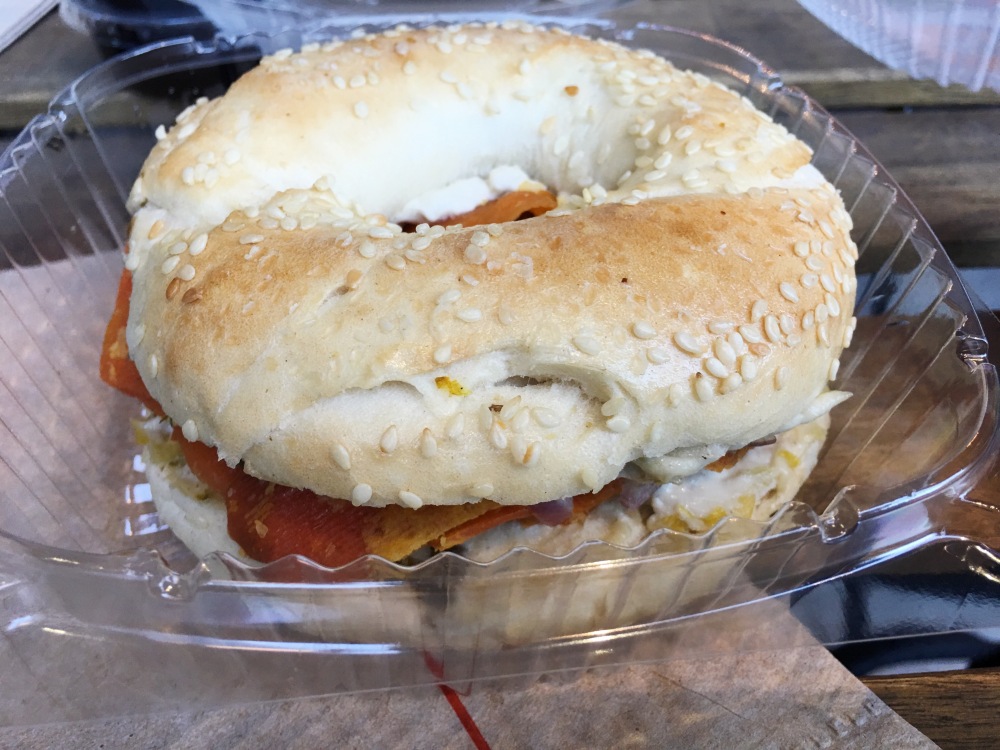 Lola Rosa has three different locations, though each one has a different set-up.  The Park Ave. location has a brewery, cocktails and a terrace, whereas the one on Milton is more of a bistro kind of place.  The William Street location, which is the one I went to, just has counter service and a grocery fridge with pre-made delights for a quick bite.  I got a bagel with cream cheese and carrot lox (the carrot lox was especially fantastic), but I couldn’t resist the alluring selection of desserts and also had to indulge in some chocolate pie! 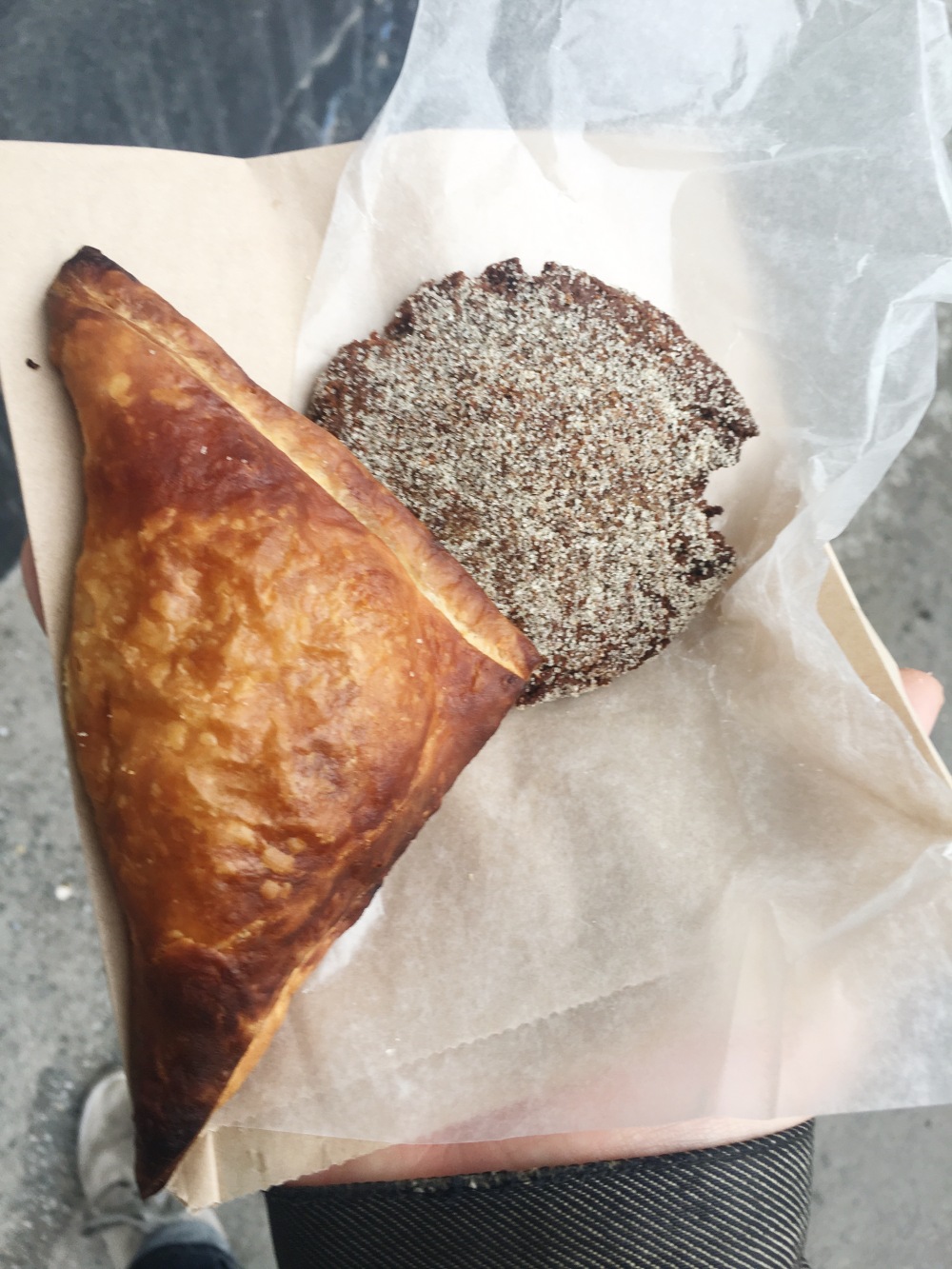 Sophie Sucree is a cozy little all-vegan bakery and boutique with a nice selection of goodies, a lot of which are also gluten-free.  I had a molasses ginger cookie and a spinach and feta puff pastry.  Savory pastry like this is often hard to find in vegan bakeries, and it was no less flaky, crispy and delicious than the butter-centric equivalent.

Bonny’s is an inconspicuous and laid-back restaurant in Griffintown, spearheaded by award-winning vegetarian chef Bonnie Tees, with a menu centered around organic, whole foods.  I had the Deluxe Nacho Plate with organic tortilla chips, homemade salsa, black bean crumble, jalapenos, avocado, cashew cream, and Daiya cheese (or regular cheddar if that’s your thing).  The black bean crumble really stood out,
but overall it was just a fantastic and very filling meal. 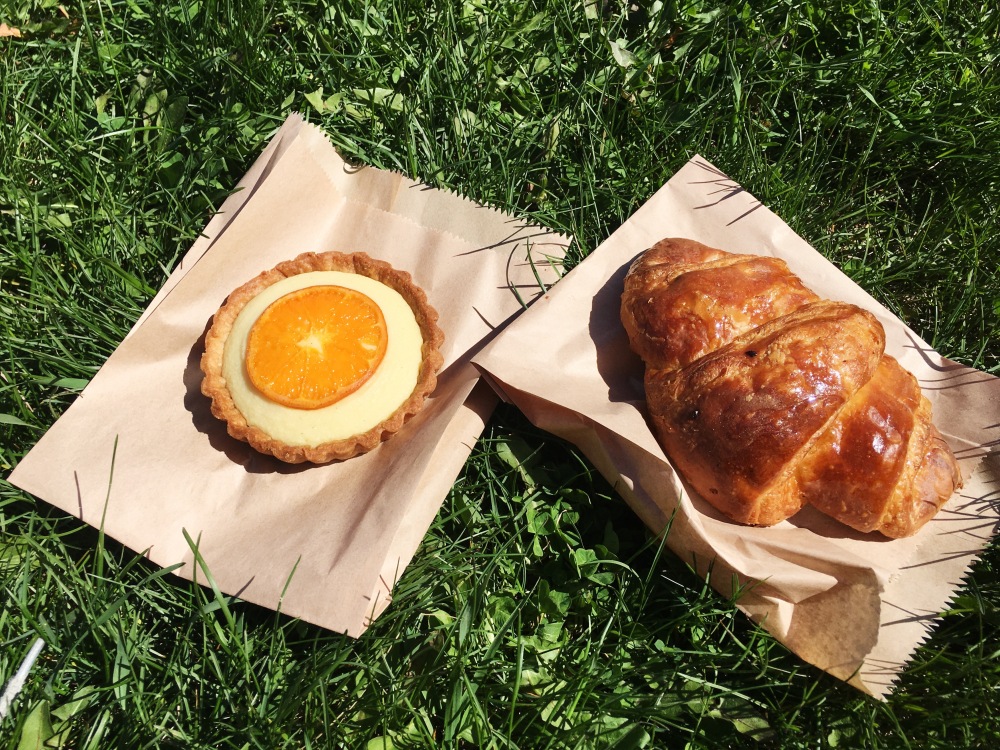 A friendly and inviting neighborhood cafe in Rosemont-La Petite-Patrie, Cafe Dei Campi has an impressive selection of sweet and savory goods and coffee drinks.  I got a glazed croissant and an orange tart and ate them while the relaxing in the morning sun across the street from the cafe, in Parc Pere-Marquette.  What a treat! 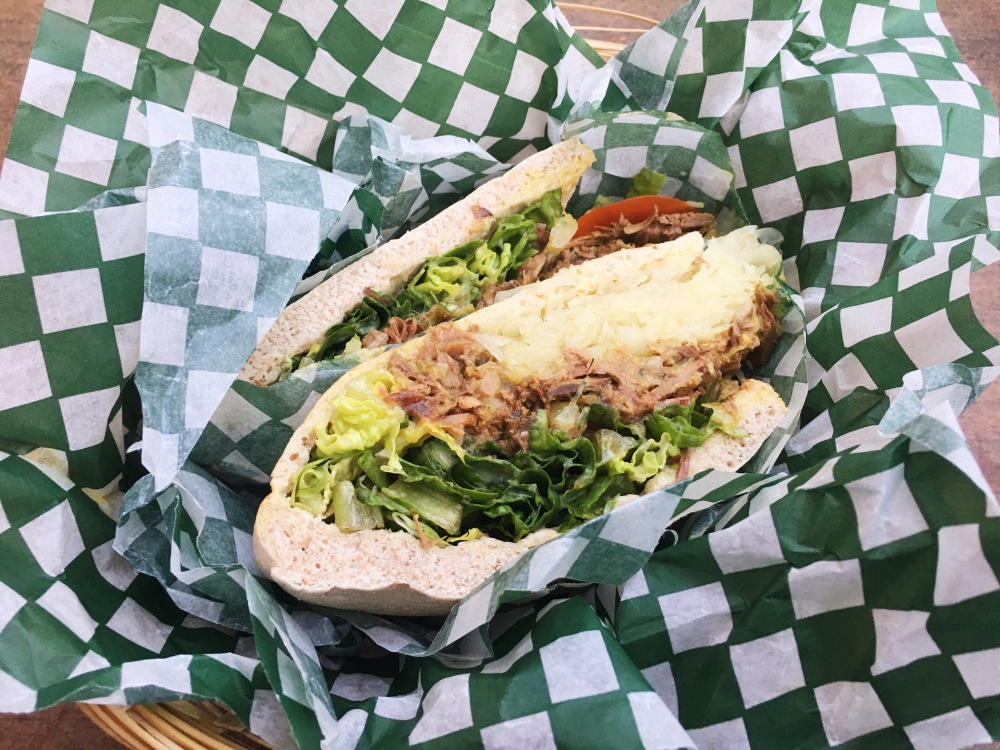 Renowned for their plant-based shawarma, La Panthere is a staple for both Montreal’s vegans and meat eaters.  They have multiple locations spread around the city, on St. Denis – because you can’t come to Montreal and not check out the lively Latin Quarter.  I had the Kharma Shwarma, which uses jackfruit in place of meat.  Sometimes jackfruit can misfire in a dish – it’s very sweet and so it needs to be paired and prepared with the right ingredients.  But the jackfruit in this sandwich was perfect in both texture and taste and the accompanying Sauerkraut was amazing!

Resonance Cafe is a cafe/bar and music venue with a really cool atmosphere, offering drinks, espresso, and some tasty light bites.  I ordered the vegan mac, and while it was not the best mac and cheeze I’ve had, it was definitely very good. I’m not sure what the sauce was made from but it had less of the aftertaste that cheese sauce can sometimes have.  The jazz performance also made a nice accompaniment to my meal.

Chef and co-owner, Dalla Libera makes his own ice cream and cookies in-house and you can taste the heart, dedication, and high-quality ingredients in each bite of Dalla Rose’s cold succulent treats.  The flavours change periodically, depending on ingredient availability and freshness, but they always have a few vegan options in both the ice cream and cookies.  I ordered the Matcha one – it was some of the best ice cream I’ve ever had!