I recently wrote nostalgically of an early food memory I have of Blueberry Muffins. Now it’s time for another food memory that I think a lot of us of a certain era may share. Did ya’ll eat a lot of the canned Chef Boyardee Ravioli as a kid? I certainly did. Along with Kraft Dinner, Grilled Cheese and Tomato Soup, Chef Boyardee Ravioli was a lunchtime staple (I know – not a particularly healthy trifecta). I’d rush home from school at lunch and waiting for me would be a bowl of hot, beef stuffed pasta. It’s been many years since I’ve had Chef Boyardee but I suspect that it would not live up to my memory of it. It’s pasta in a can after all, and now that I’ve officially delved into fresh pasta making, I suspect it would have even less allure. It’s a nice memory nevertheless and it inspired me to try and make a veganized version of that childhood classic.

While I’m all for winging it when come to homemade pasta forming, I did invest in Ravioli mould for this recipe. I got this one from Williams Sonoma (it’s pretty much the only thing I can afford from William Sonoma – like, really guys $300 for a frying pan?) which even comes with a handy little mini-rolling pin as well. It worked very well, though I couldn’t cut out the ravioli out of the mould and still maintain the little ridge formations along the outside, but this probably had more to do with the dough than the mould itself.

For the filling:
340g (12oz) of vegan “ground beef” crumbles (my favourite is Tofurky’s Plant Based Chorizo Crumbles)
2 x 227g contains of vegan cream cheese(save 2 tbsp for the sauce) (I used Tofutti)
1 cup of baby spinach

For the sauce
1 x 300g jar of sundried tomatoes, including oil
1 cup of baby spinach
2 tbsp of cream cheese
1/2 cup of water

Directions
1. Make the dough. In a large mixing bowl, mix together the 3 1/2 cups of flour, 3/4 cups of water, 1 tbsp of oil. Use your hands to form the dough and knead it for about ten minutes to activate the gluten.
2. Make the filling. In a large mixing bowl, mix together the 12 oz of burger crumbles, the two 227g containers of cream (hold back 2 tbsp for the sauce), and the 1 cup of spinach.
3. Make the sauce. In a blender or food processor, pulse together the sun-dried tomatoes, baby spinach, 2tbsp of cream cheese, and 1/2 cup of water.
4. On a lightly floured surface roll out enough the dough to cover the ravioli mould. Place the rolled out dough over the mould and use finger to create a slight indent where the grooves are. Scoop about a spoonful of the filling into the indents.
5. Roll out a second piece of dough to place over the top of the first piece of dough. Use your thumb to press the two pieces of dough together. Then flip the mould and trim the edges with a knife. The intention with the mould is that the dough should just tear apart – but you’ll probably have to cut it.
6. Bring a pot of salted water to a boil. Reduce to medium heat and using a slotted spoon, place the ravioli into the water. Cook for 10-12 minutes.
7. Serve with the sauce and top with your favourite vegan parmesan or nutritional yeast. 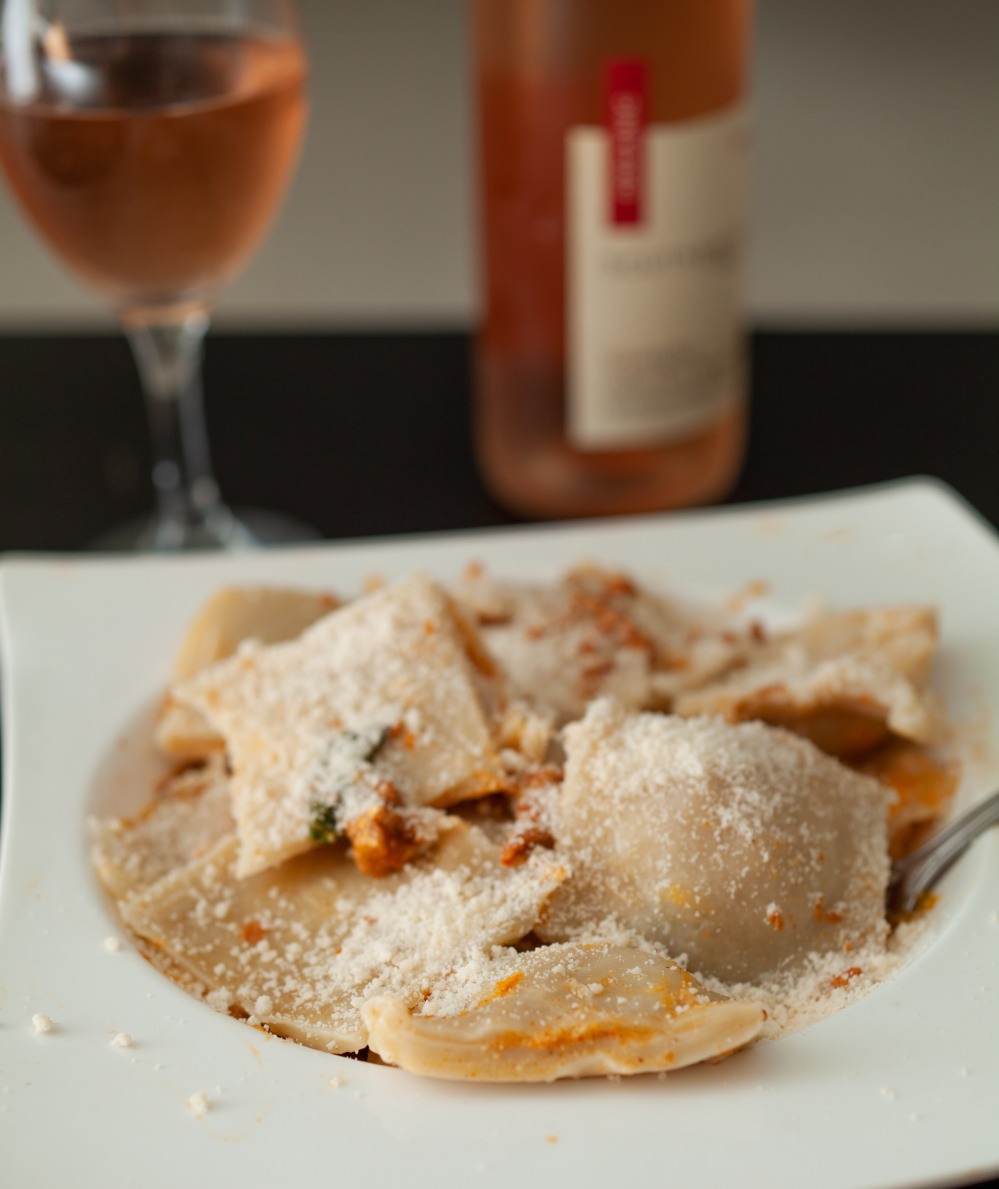