As I’ve documented a few times in various online channels, pizza is my favorite food.  A cheese pizza was the last thing I ate before going completely vegan ten years ago, and while there wasn’t much that I thought I’d miss foodwise, I did have some reservations about giving up pizza.  Fortunately that same year, 2009, Daiya Foods, now one of the certified superstars of the Canadian plant-based food scene, first launched their Daiya shreds, thus saving vegans from forever pining for an authentic slice of cheesy za.

Flash forward to 2019, veganism’s popularity is growing by leaps and bounds and many major restaurant chains are actively embracing plant-based options.  Pizza restaurants have been no exception, and even in the last year, several more big-name pizza chains have come aboard.  And four of the pizzerias on this list are completely vegan!

I’ve seen several lists floating about the internet reviewing vegan pizza options in the 6ix already – there’s a lot of brave souls undertaking this doughy mission all to serve the public good – but I wanted to make my own unique list, with some insight into my personal favorites.

For the sake of brevity, and perhaps my health, I’ve set one parameter on the pizza places to be included.  A vegan cheese option, for me, makes the difference between an actual vegan pizza and a vegetarian pizza with no cheese – which you can pretty much get anywhere.

Il Fornello (Multiple locations)
Il Fornello, a local purveyor of casual fine Italian dining, should be commended for their commitment to vegan cuisine while still staying true to their rich culinary traditions.  With a dedicated plant-based menu full of modified Italian classics like Agnolotti, Spaghetti, Risotto and Rigatoni, and even a few dessert options, you’ll be hard-pressed to find a more vegan-friendly restaurant in the city, especially for Italian food.  It’s also important to mention that Il Fornello’s vegan options are not just simple substitutions – each item has clearly been carefully thought and designed, with care and attention paid to the quality of the ingredients.  The pie selection includes a Vegan Sausage or Pepperoni Pizza, a Greek Pizza (topped with tofu feta!) and a Funghi Pizza.  Take note that they also have a vegan version of their brunch menu as well! 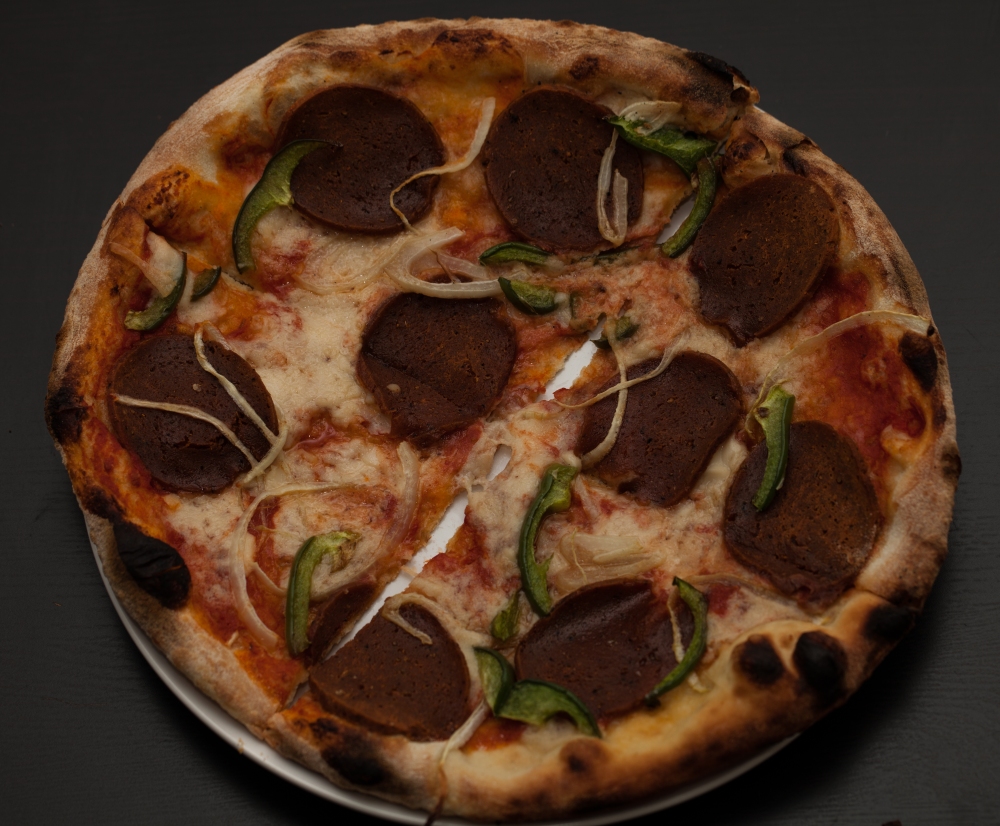 Pizza Pizza (Multiple locations)
Pizza Pizza has a bit of a reputation as being a pit of late-night pizza related despair (perhaps some other types of despair as well) and for serving the kind of slice you only grab at 2am in a drunken post-bar haze, that you will savor for all its greasy deliciousness in the moment, but regret eating shortly after.  But that reputation, at least in terms of the quality of the pizza, is not at all accurate.  In fact, in this list of fifteen pizza places, I might even be tempted to place it in the top half.  They make a solid pizza, with a nicely baked crust and flavourful sauce.  Not a huge range of vegan options really but the pizzas are customizable and there’s a good selection of veggie toppings plus a non-dairy cheese option, which I believe is Earth Island Mozzarella.

Apiecalypse Now (735 Bloor St. West)
One of the four completely vegan pizzerias on this list, Apiecalypse Now, has been crafting completely original, wildly innovative, and creatively named pizzas at their Koreatown location for several years now.  With an extensive selection of pies plus donuts, ice cream, poutine, corn dogs among other delights, this is one of the city’s best destinations for decadent junk food, vegan or otherwise.  They also sell pizza by the slice, if you have the willpower to restrain yourself. 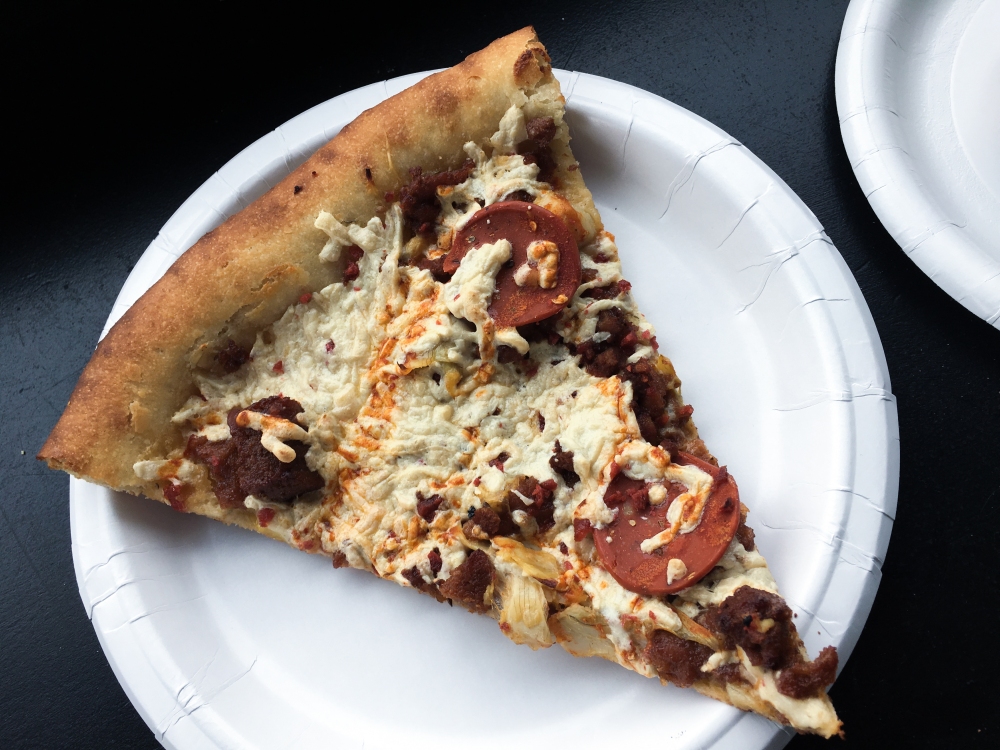 Mama’s Pizza (Multiple locations)
Mama’s Pizza is a Toronto staple and one of the city’s original pizza purveyors – they’ve been at it since 1957!  They have six different specialty vegan pizzas.  My personal favorite is the Vegan Sausage Classic. It’s a hearty, traditional pizza with a rich tangy sauce, and they don’t skimp on ingredients.

Planta (1221 Bay Street)
Though not exclusively a pizza joint, the upscale plant-based Yorkville restaurant does have a good selection of pies on their menu.  As one can imagine, given the pedigree and location of Planta, the prices are a bit on the high side.  Their personal-sized pizzas start at $18.50, but the quality of the ingredients is pretty remarkable.  They use 00 flour for their crust.  The 00 is an Italian classification for flour texture and this particular grade is generally considered the best stuff you can possibly get for pizza making.  The creamy smooth cashew mozzarella is even made in house!  (I seem to have lost track of the photo I had of their pizza – the photo below is actually of their equally amazing calzones!) Panago (Various)
Panago is a Canada chain that doesn’t get nearly the love that it should.  Even after sampling pizza from all over the city and the huge variety that’s on offer, Panago remains my favourite.  The crust is moist, but with a good density and perfect texture and the sauce is bursting with rich tomato flavour.  You can choose from a selection of five plant-based pizzas, which feature Daiya as the cheese option, or you can build your own.  My go-to is the Vegan Deluxe Pepperoni.

Virtuous Pie (611 College Street)
West Coast import, Virtuous Pie has officially landed in Toronto, and their artisan, hand-made vegan pizza pies are not to be missed.  Everything is crafted in house and they only use the freshest ingredients, even sourcing much of their produce from local growers and suppliers.  They have eight varieties of pizza, each topped with their unique arsenal of ingredients, like buffalo cauliflower, charred fennel, herbed potato cream, and almond ricotta.  In addition to the delicious and innovative food, the restaurant has a beautiful designed, light-filled interior with a healthy amount of seating and a lovely view of College Street where you can sit and enjoy the lively ambiance of Little Italy. 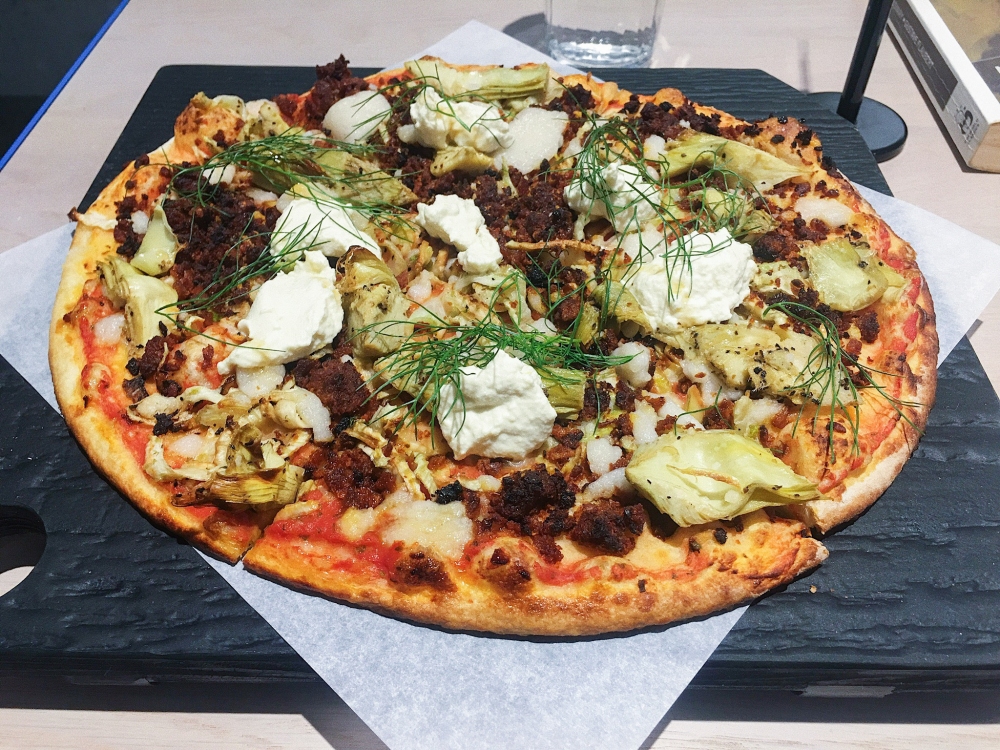 Pizzeria Libretto (Multiple Locations)
Pizzeria Libretto is another local Italian mainstay that has made a genuine effort to incorporate plant-based options into their roster of classics.  Their vegan mozzarella is made in house.  They don’t really have a specific vegan menu though, only customizable pizzas and the specialty toppings are limited to the cheese, but this is high-quality and authentic Neopolitan pizza that is definitely one of the must-tries in the Toronto pizza scene.

Blaze Pizza (Multiple locations)
Blaze Pizza has been expanding over the last couple of years and now has three locations in the GTA.  Their fast-fired customizable pizzas are cooked in a wood oven, and the thin crust comes out after 180 seconds with a beautiful crispness and texture.  Each personal-sized pizza is customized to each customer, and along with the usual assortment of veggie toppings, they also offer Daiya as a cheese substitute.

Pizza Nova (Multiple locations)
Pizza Nova is another well established Toronto mainstay, having been founded in 1963 by a family of Italian immigrants.  It’s old school, classic pizzeria pizza at its best.  They don’t have specifically vegan pizza but do offer Daiya as a cheese substitute.

Pizza Del Arte (Multiple Locations)
Pizza Del Arte has three locations in Toronto but doesn’t seem to be as widely known as some other local pizzerias.  Their thin crust artisan style pizza is stellar though and they have a dedicated vegan menu that has some of the most original and diverse plant-based pizza options in the city, including such gems as a Vegan Thai coconut chicken and a Vegan cheeseburger.

Salt and Tobacco (521 Parliament Street)
Salt and Tobacco is a Cabbagetown pizzeria with a friendly neighborhood ambiance that offers hearty pizza pies and a nice selection of craft beers and wines.  Their vegan option is called Vegan Delux and is topped with vegan mozzarella, vegan sausage, plus an assortment of fresh veggies.

Assemblii (373 Church Street)
There’s a scarcity of vegan options amidst the pub and bar-heavy fare of the Church-Wellesley village, so Assemblii is a welcome addition to the neighbourhood.  With 50 plus topping options to customize the personal sized, made fresh pizzas, there is a lot of potential variation.  They have vegan cheese as well as a herb and olive oil tofu as a meat alternative.

Away Kitchen (536 Queen West)
As nice and convenient as it is that mainstream pizza chains are now offering vegan cheese and other plant-based options, we also need restaurants like Away Kitchen that develop, push and hone vegan cuisine beyond simple substitutions.  As the sister restaurant of Awai, one of Toronto’s premiere vegan dining institutions, Away Kitchen has a prestigious culinary pedigree behind it.  They have a full menu, with soups, salads, sandwiches and even a vegan cheese board, but the pizzas are definitely the highlight.  With a large retractable window that faces the iconic Queen Street West, you’ll be able to enjoy the hustle and bustle of the city while munching away. 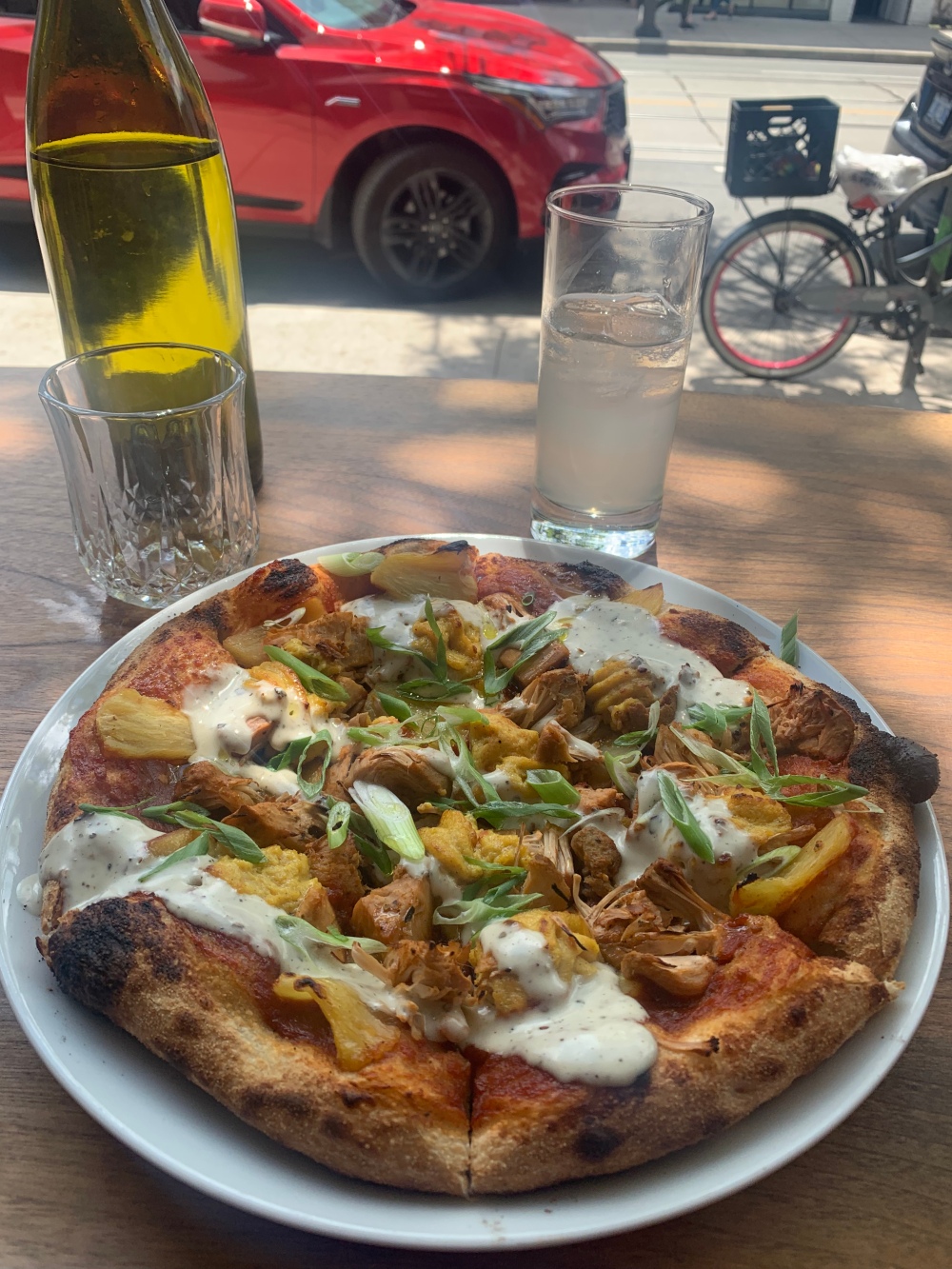