I’m not sure what ignited my Los Angeles and SoCal infatuation but it goes a long way back.  An eight or nine-year-old version of myself even made a bold prediction – that he would one day move to California, a place he’d never been, and live near the ocean, in a beach house, with sand dunes curling across the lawn, and waves beating in close proximity.   Los Angeles has been such a Goliath figure in my mind for so long that it seemed impossible that the reality of it could live up to my expectations.  Now, having finally made the pilgrimage to the City of Angels, that preference for the lifestyle and landscape of California that I proclaimed as a child has been validated.

Similar to my experience last year in Los Angeles’ northern sister city, San Francisco, after a few days of settling into the groove of the city, I felt completely at ease.  When I arrived at my Airbnb in my Santa Monica, after having successfully found my way via transit from LAX, the first place I headed was to the beach.  I picked this particular Airbnb, because it was 5-10 minutes from the ocean and what a good choice I made.  As I walked down Ocean Park Blvd, and came up over the 4th street overpass and saw the rim of the Pacific, glowing in the sunset, I felt like, after 12-month absence, I’d finally come home. 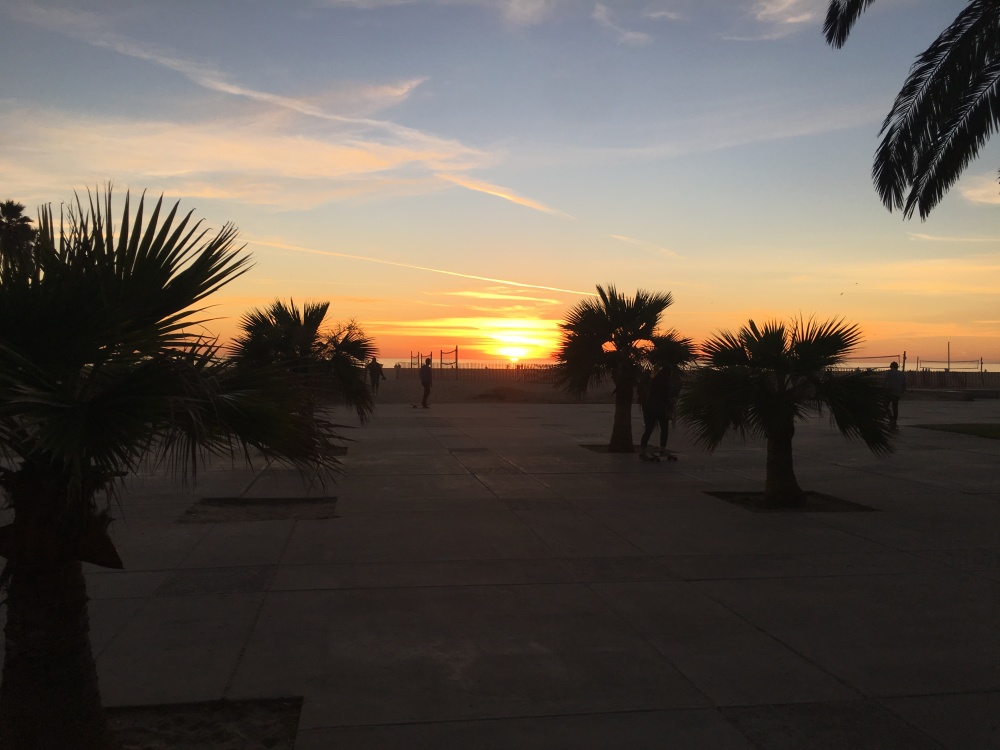 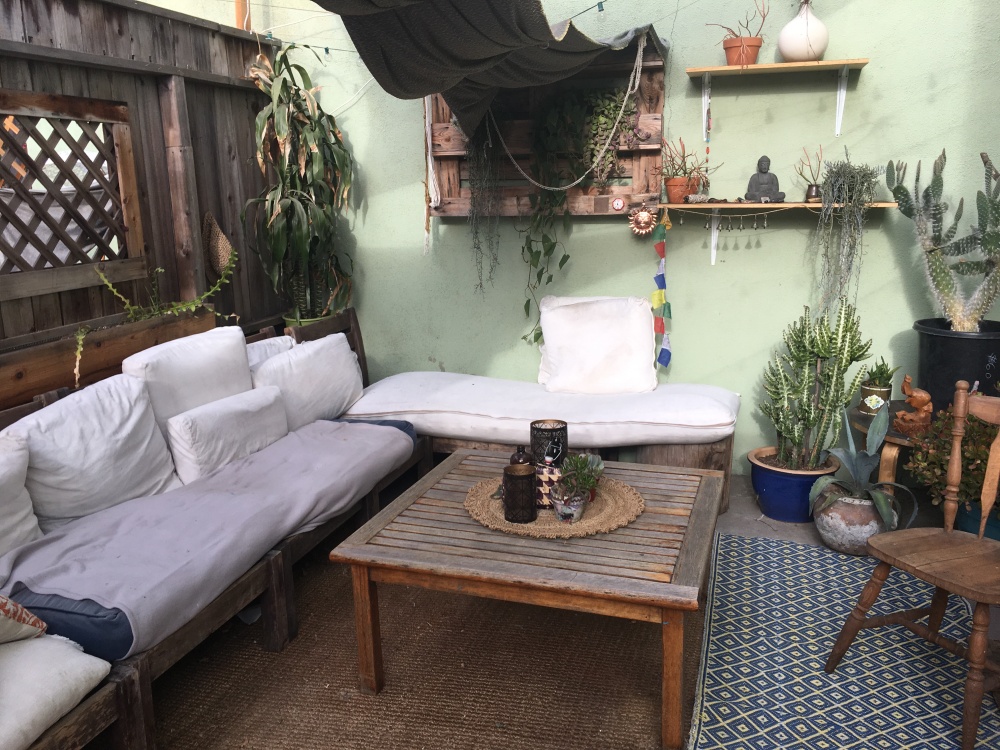 Los Angeles, true to its reputation, tenaciously embodies urban sprawl.   Like Aldous Huxley (or maybe Dorothy Parker) said, Los Angeles is, “19 suburbs in search of a metropolis.”  And throughout those innumerable suburbs, there doesn’t seem to be entirely consistent identity, other than being similarly Californian.  While getting around the massive city-county is time-consuming, the sprawl does seem to have allowed for each domain to flourish in its own way.  Life in Los Angeles without a car must be tough though.

Despite what some cynics might tell you, Los Angeles does, in fact, have a transit system, and it’s not terrible.  There are even some benefits to taking transit.  For one, it’s very affordable.  Of course, I’m coming at it with the perspective of a Torontonian, where the transit is ludicrously expensive.  Most LA county lines are $1.75, and some are even cheaper.  Considering the number of miles that are covered by these routes, that’s quite a deal.  I bought a week pass for $25.  Transit also gives you the opportunity to see more of the city, especially the in-between bits, which are so spread out that they are difficult to explore otherwise.  It also tends to not be that crowded on most routes, so a good seat is often a guarantee.

As you can imagine, there’s a huge amount to see and do in a city of this size.  Los Angeles is a cultural, financial and creative center.  In the same day, you can stroll the bustling Hollywood strip, take a studio tour, hike a mountain, see some legendary pieces of art, lounge on the beach, and get lost in a maze of skyscrapers.  I tried to do a bit of everything, while also sampling some really terrific food.

I spent the rest of my first night wandering along the beach, eventually making my way to the Santa Monica Pier.  This was one of my favourite places in Los Angeles – I think I ended nearly every night with a walk through the iconic amusement park at the foot of Colorado Avenue.  It’s a great place to people watch, and eat a pretzel, while listening to the numerous boardwalk musicians.  The 3rd Street Promenade,  a vibrant, busy pedestrian plaza that stretches several blocks through downtown, is a little bit north of here. 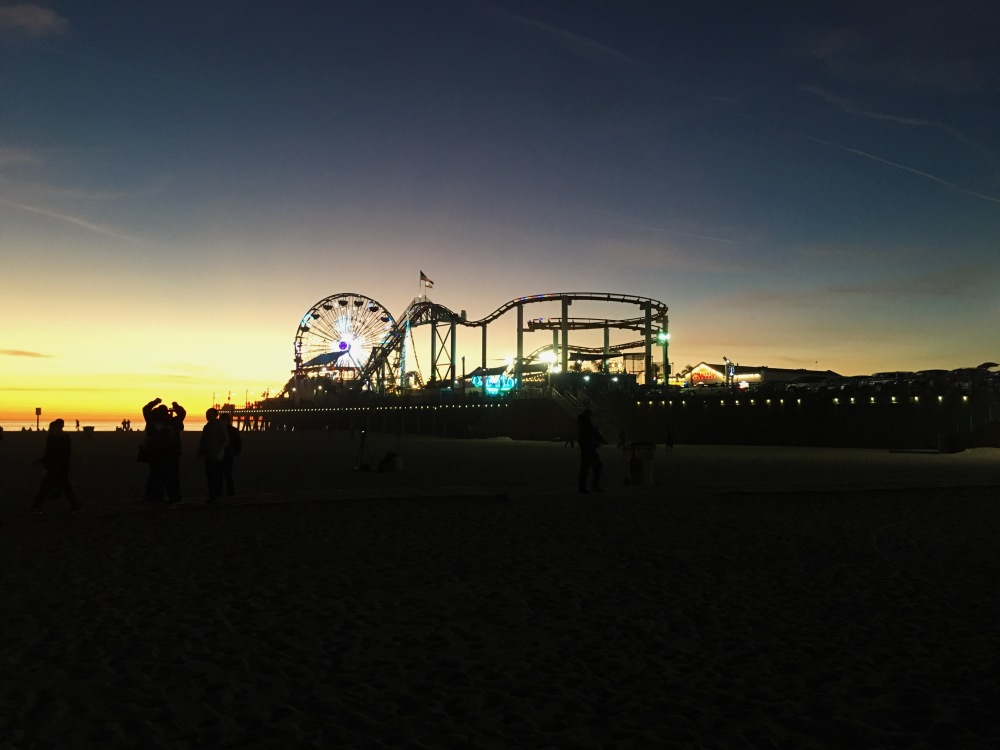 On my way back to my AirBnB, I stopped in at Thai Vegan (2400 Main Street, Santa Monica), a food kiosk with a beach and bamboo vibe that serves an excellent and affordable array of Thai favourites.  I made a couple trips and got to try both their Pad Thai and Vegetable Dumplings, both of which I can highly recommend. 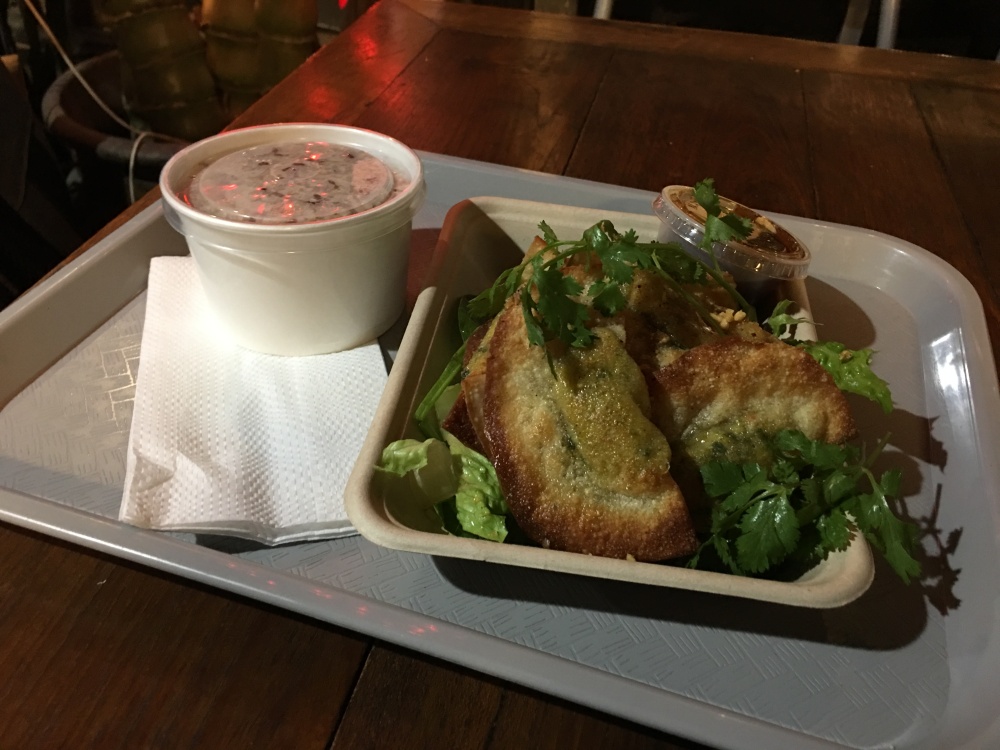 Another restaurant worth visiting in Santa Monica is Golden Mean Cafe (1028 Wilshire Blvd).  The charming, inconspicuous cafe with a fairly large menu that includes sandwiches, pizza, bowls, smoothies and some really fantastic desserts.  (The Lemon-Saffron cake was a sweet, light and fluffy delight.)  In my two visits, I tried the Supreme Pizza, and the Vegan Chicken Pesto Panini – both were wonderful and very filling without being overly heavy and were chocked full of fresh ingredients. 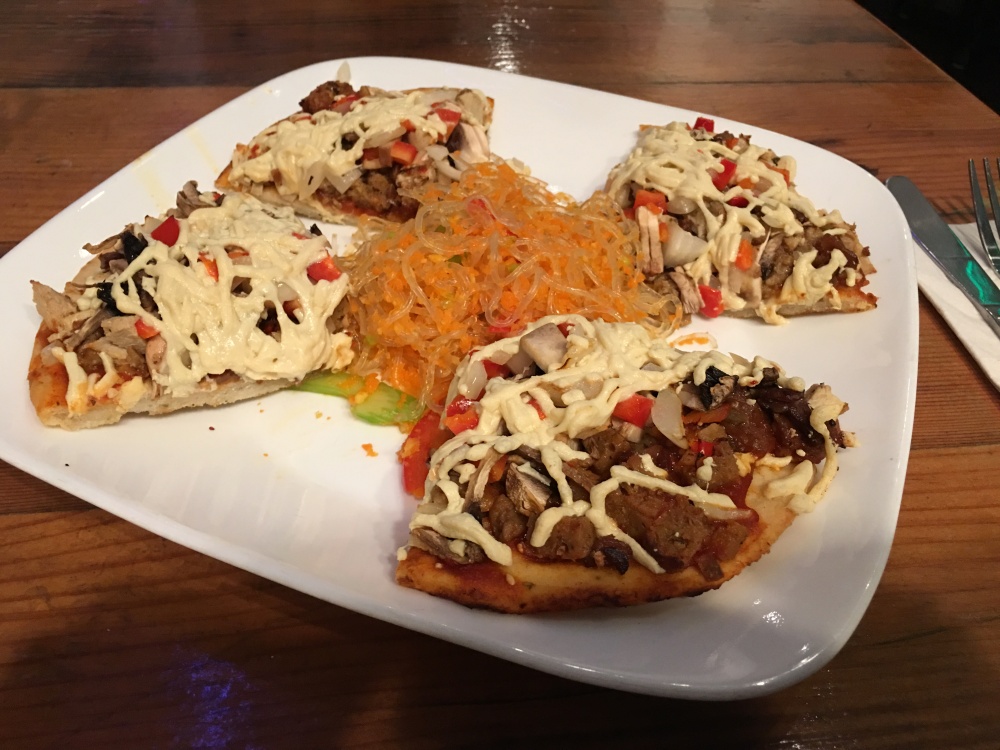 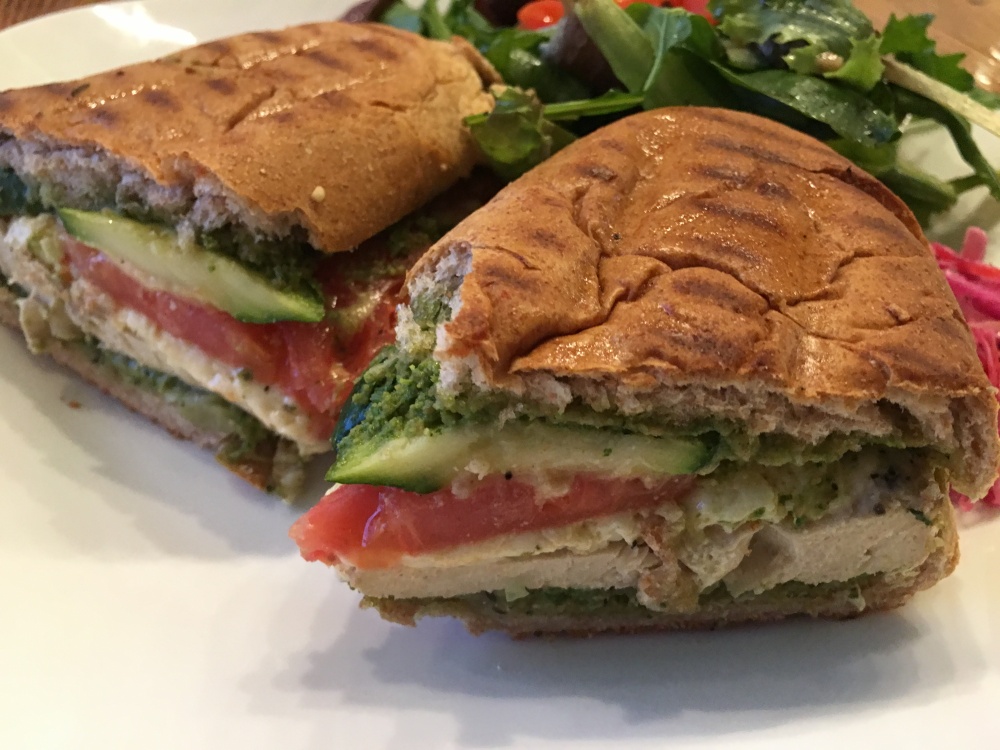 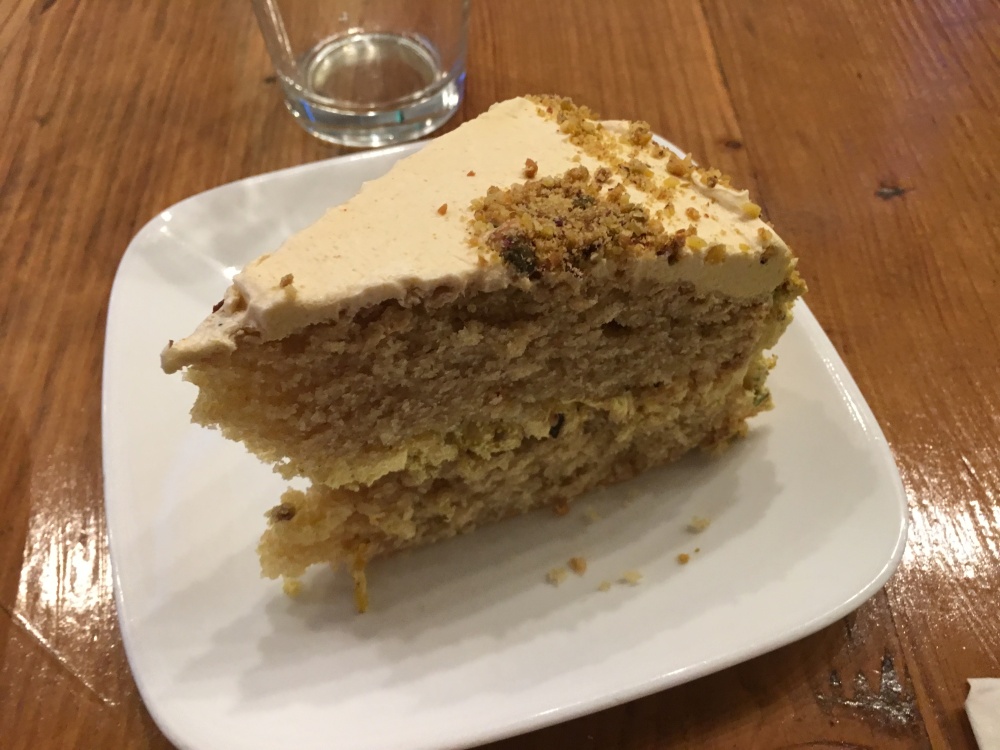 If you’re looking for something a little more glutinous and greasy, head to Doomie’s Home Cookin’ (1253 Vine St, # 9).  They serve a classic American menu with burgers and fried everything (including Oreos).  I can’t say it’s high-quality food, and I definitely felt a bit sluggish after downing my Fried “Chicken” basket, complete with a side of mac & cheese, but if you’re in the mood for this kind of food, nobody does it better. 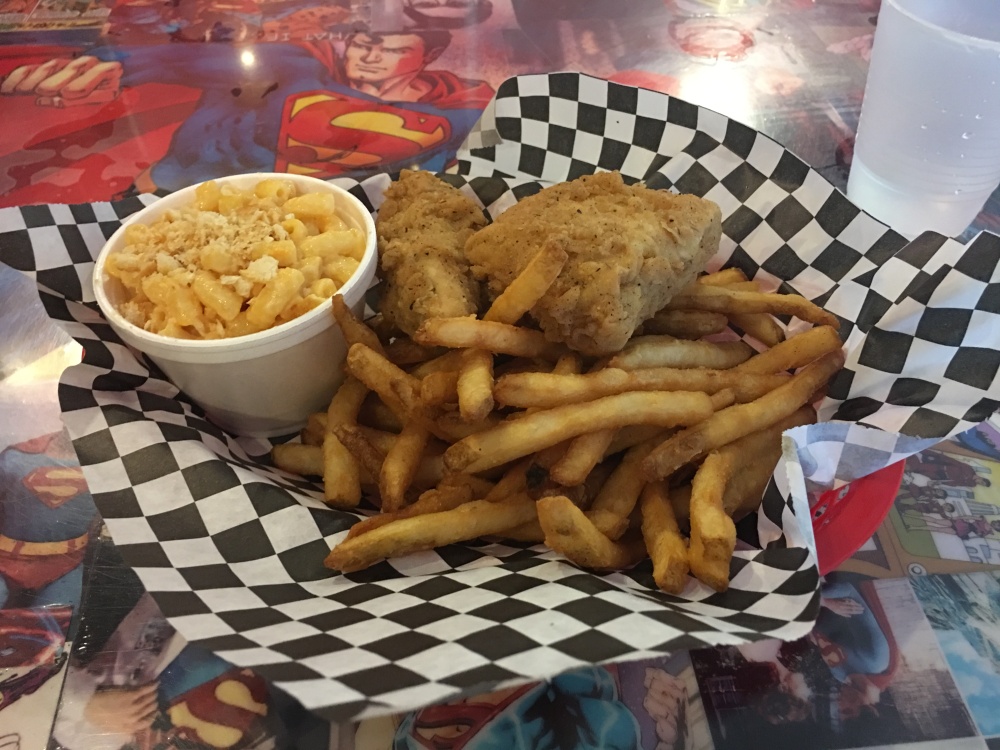 If you need to take a walk after this indulgence, just head north on Vine and you’ll reach the famed intersection, Hollywood and Vine.  Head west and you’ll be at the heart of the Hollywood strip, where you can find landmarks such as Grauman’s Chinese Theatre, Madame Tussaud’s Wax Museum, and the Walk of Fame.  It’s super touristy and often packed, but if you’re in Los Angeles, it’s something you have to see.  If you’re in the market for some souvenirs, there’s a ton of stores around the strip selling every kind of memorabilia you can imagine. 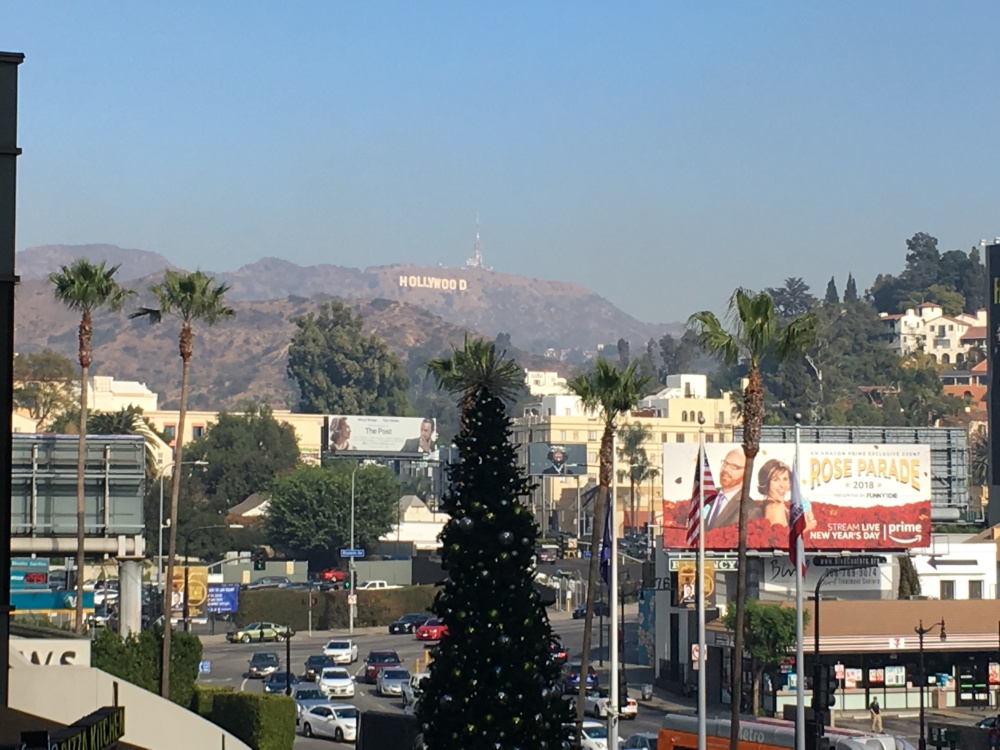 While Los Angeles is a busy city, it’s also easy to get away from the crowds and traffic and explore the many trails that loop through the nature filled perimeter.  I took a New Year’s Day hike up into the Hollywood Hills.  There are tremendous views of the city from Griffith Park and the Observatory at its peak.  Before I headed up though, I stopped for lunch at Cruzer Pizza (4449 Prospect Ave) in Los Feliz.  I had their vegan BBQ chicken pizza.  It was the best pizza I’ve had in a while, and perhaps the best meal I had while in LA.  It gave me all the energy I needed to climb a mountain. 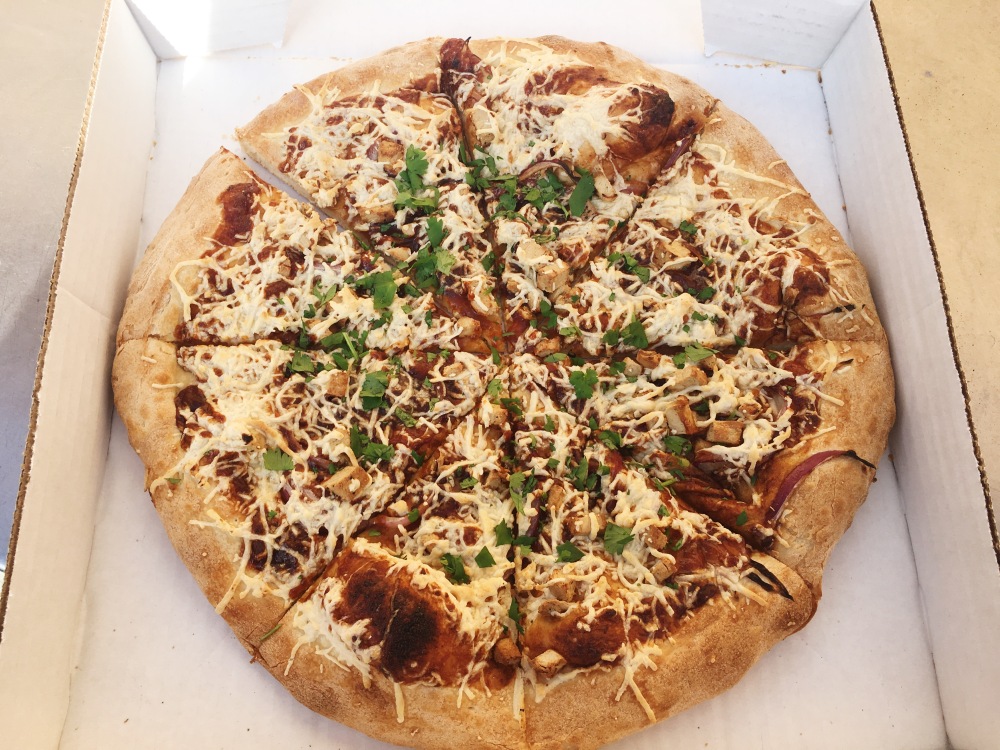 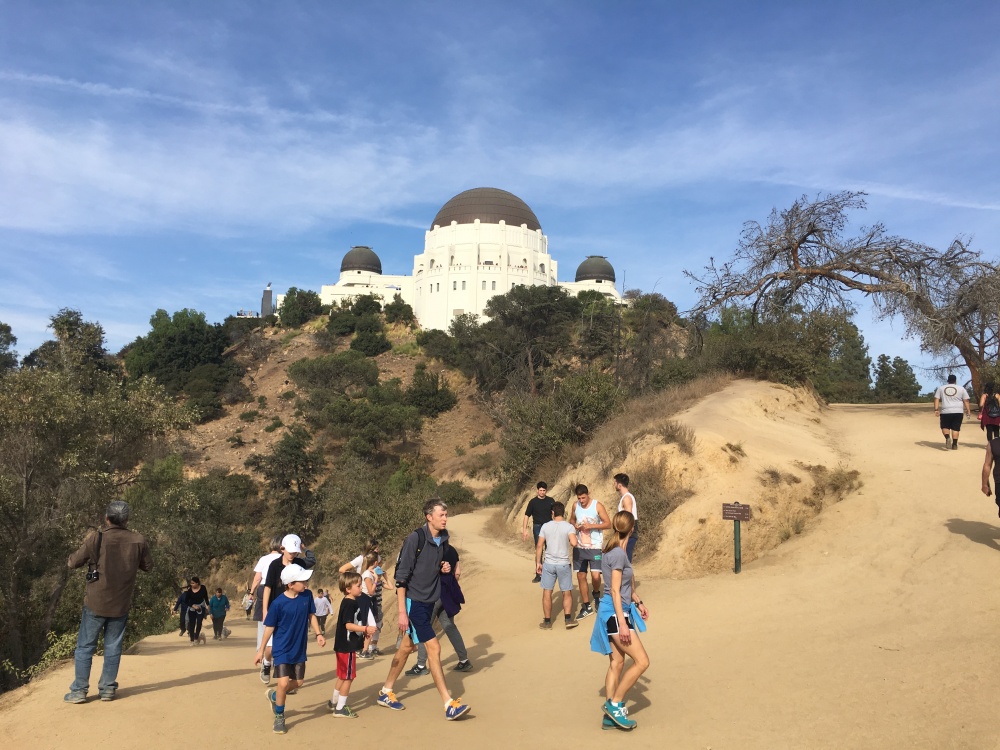 Southeast of Los Feliz is one of LA’s key veg-centric strips.  Follow Sunset Blvd through Silver Lake and you’ll find a number of restaurants, cafes, and bakeries with a wealth of vegan options.  Unfortunately, I didn’t have the time or the money to check out mainstays like Mohawk Blend, My Vegan Gold, By Chloe, Little Pine, Sage Bistro, and the list could go on I’m sure.  I picked the most economical option and went to the excellent Flore Vegan (3818 Sunset Blvd)   This cozy hipster joint has a pretty cool catering menu that includes a vegan cheese plate and a vegan deli plate, but they also have an extensive eat-in menu.  I tried the Tempeh Reuben.  I think in terms of quality of ingredients, Flore Vegan, definitely won among the restaurants I visited.  The sandwich was clearly made with careful consideration of the way the individual flavours worked together.  It was not all just sloshed together and thrown on a piece of bread.  For dessert, I headed a little bit east of Silverlake to Echo Park, to Cinnaholic (2134 Sunset Blvd).  Cinnaholic has a really novel concept – you can build your own Cinnamon Bun!  There’s a huge variety of ingredients/toppings to choose from or you can get one of the pre-made flavours.  I had a strawberry cheesecake one, which I ate leisurely while relaxing on their small patio- sun and sugar, is there anything better? 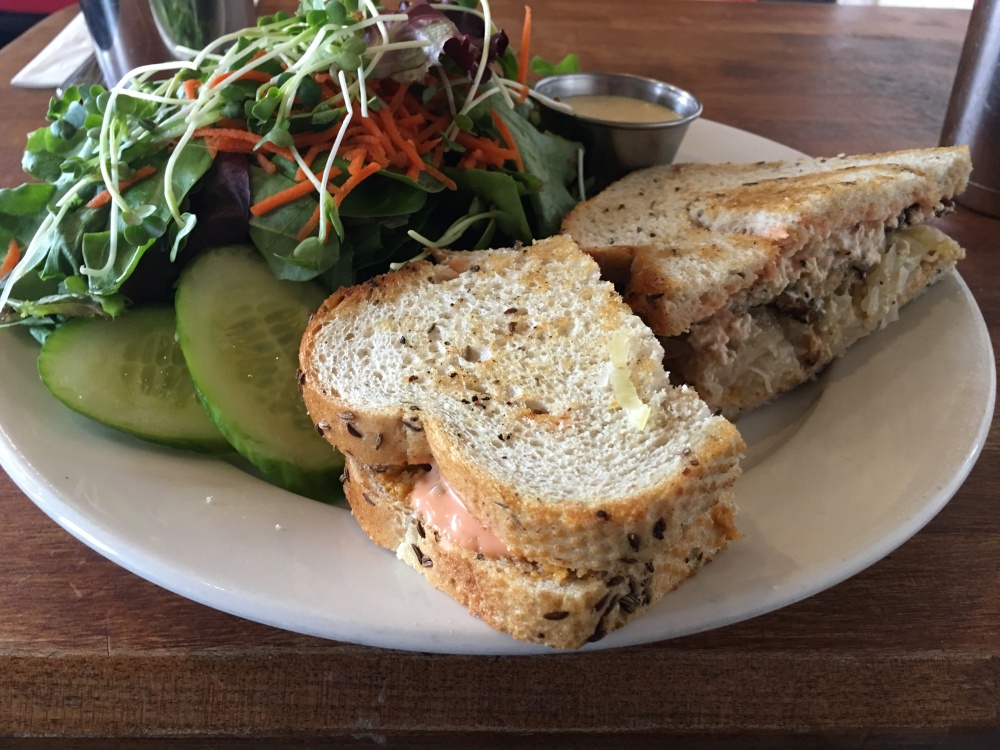 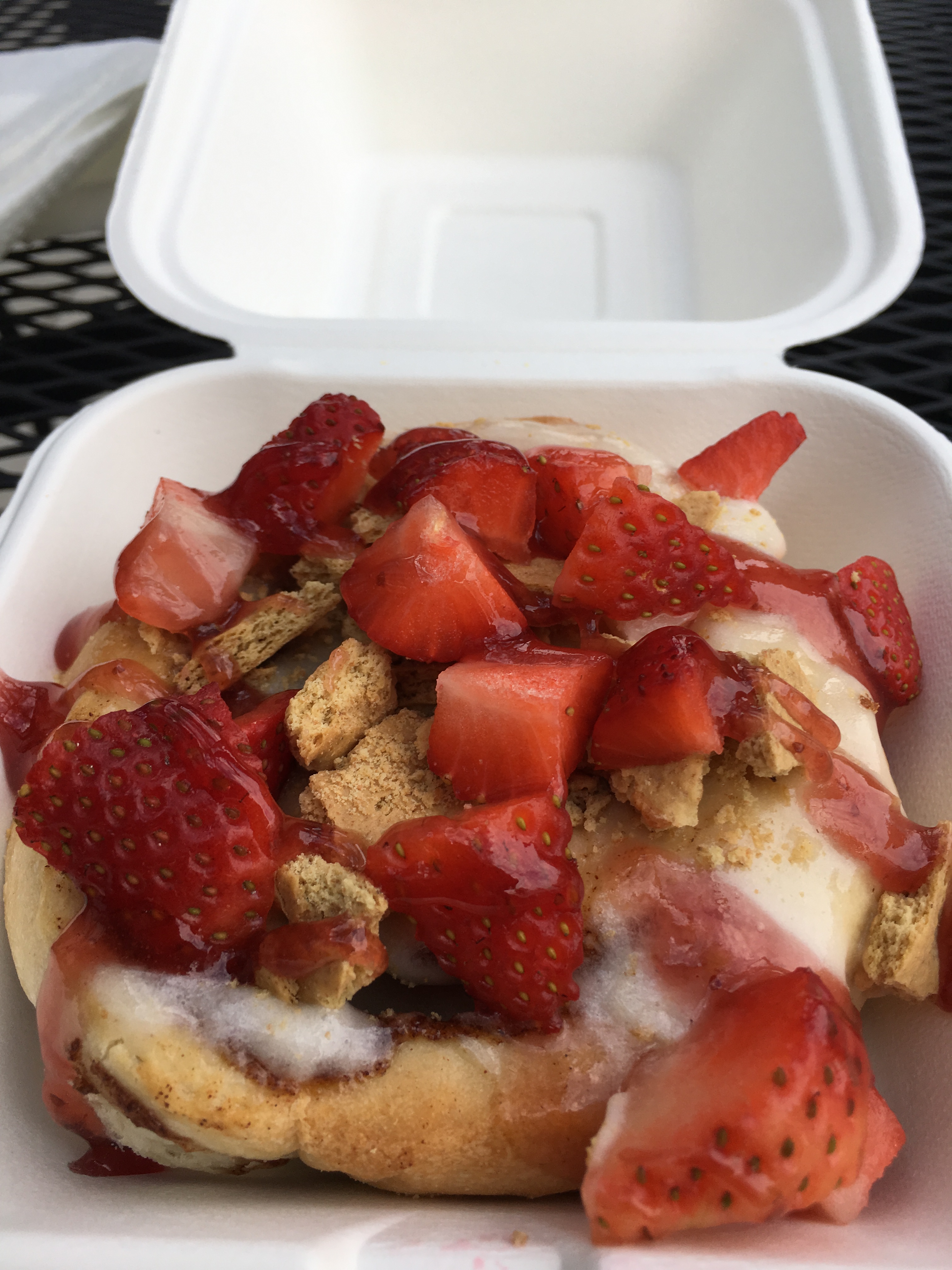 Since navigating around Los Angeles can be time-consuming, I found that it’s best to plan where you’re going to eat prior to heading anywhere, lest you find yourself hungrily searching the dark streets for vegan sustenance.  Fortunately, there is Veggie Grill, a vegan fast food chain with numerous locations spread around the city.  I found that no matter where I was, there was usually a Veggie Grill relatively close by.  I tried the VG Beyond Burger and the XX Fire-Roasted Chickin’ Burrito.  It’s nothing extraordinary, but sure beats the non-vegan versions of similar food.  Everything was tasty, fresh and not excessively greasy. 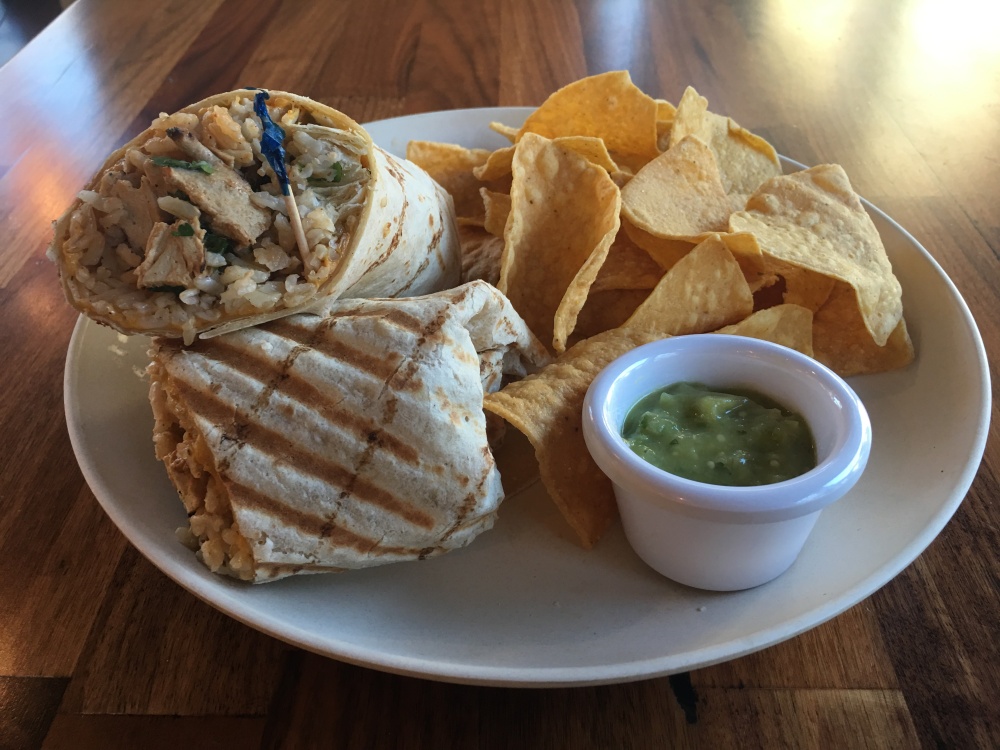 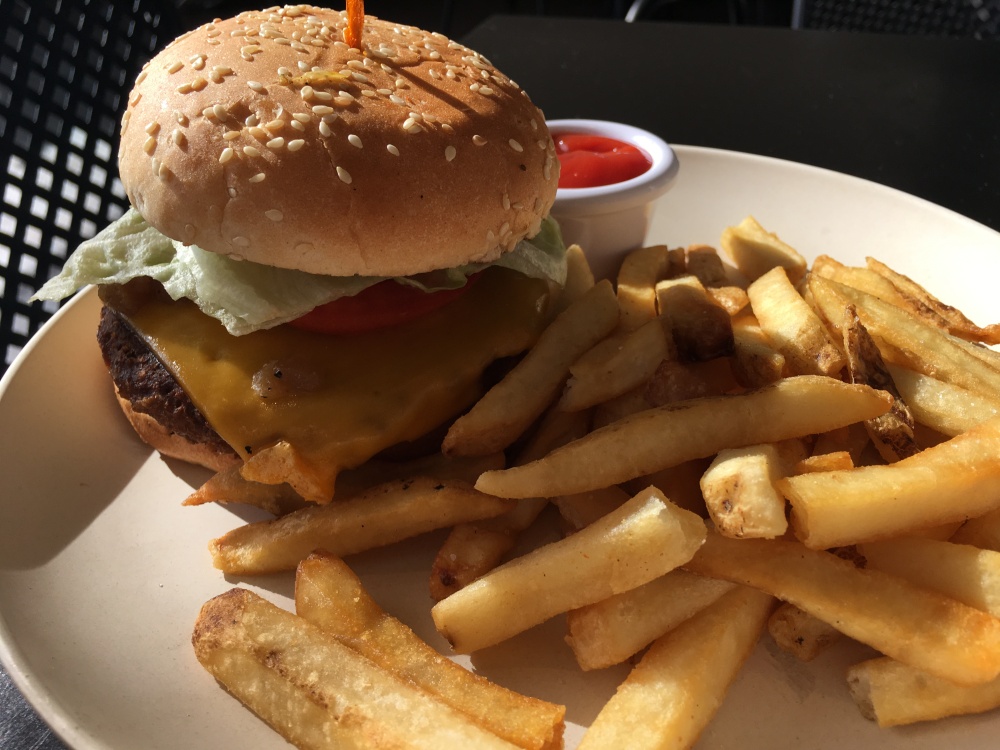 Another great option for a fast-but good food is Native Foods (1114 Gayley Ave) in Westwood.  I wished I’d had the opportunity to try a few other things on the menu.  I went for the Oklahoma class, a tasty, decadent sandwich with, “thinly sliced peppered seitan, Follow Your Heart® American cheese, caramelized onions, seitan bacon, BBQ sauce, ranch, carrots, tomatoes, red onions, and romaine.”  With options like the Portobello Jibarito, a Thai “Meatball” bowl, and a Jamaican Jerk Wrap, it was a hard choice to make. 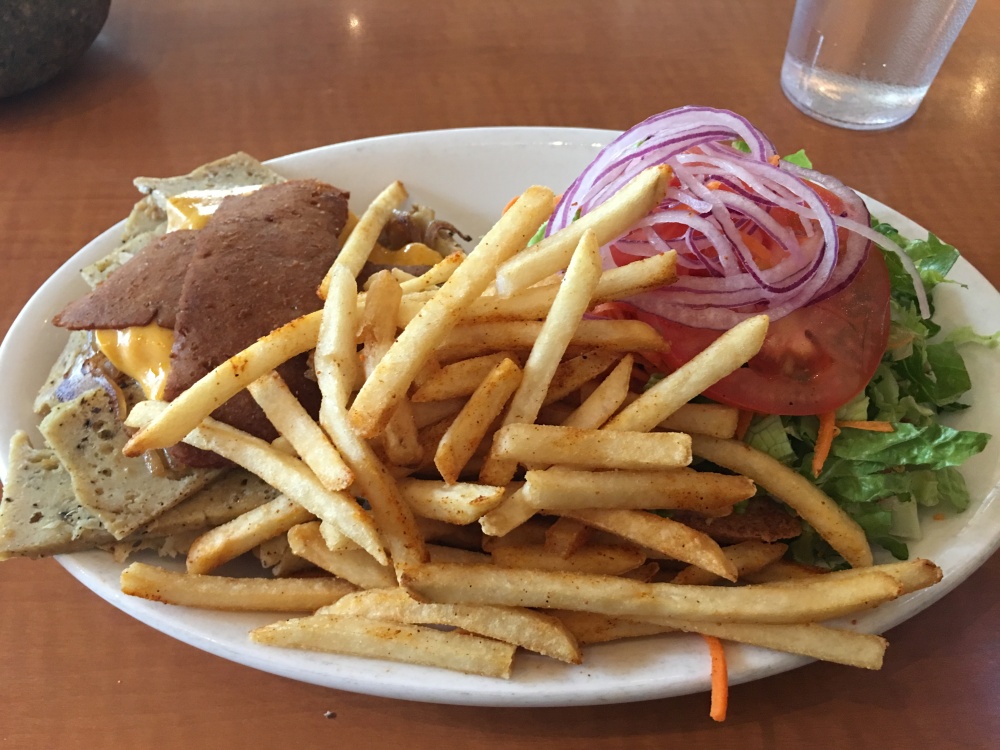 While you’re in Westwood, you can also catch the 734 bus to one of Los Angeles premiere art institutions, The Getty (1200 Getty Center Dr.)  It may take awhile to get to, but the stunning architectural wonder, nestled high up in the hills near Bel-Air, with its sweeping views of the city and remarkable collection of classic artwork, is a not-to-be-missed experience.  Best of all, like a lot of museums in LA county, admission is completely free! 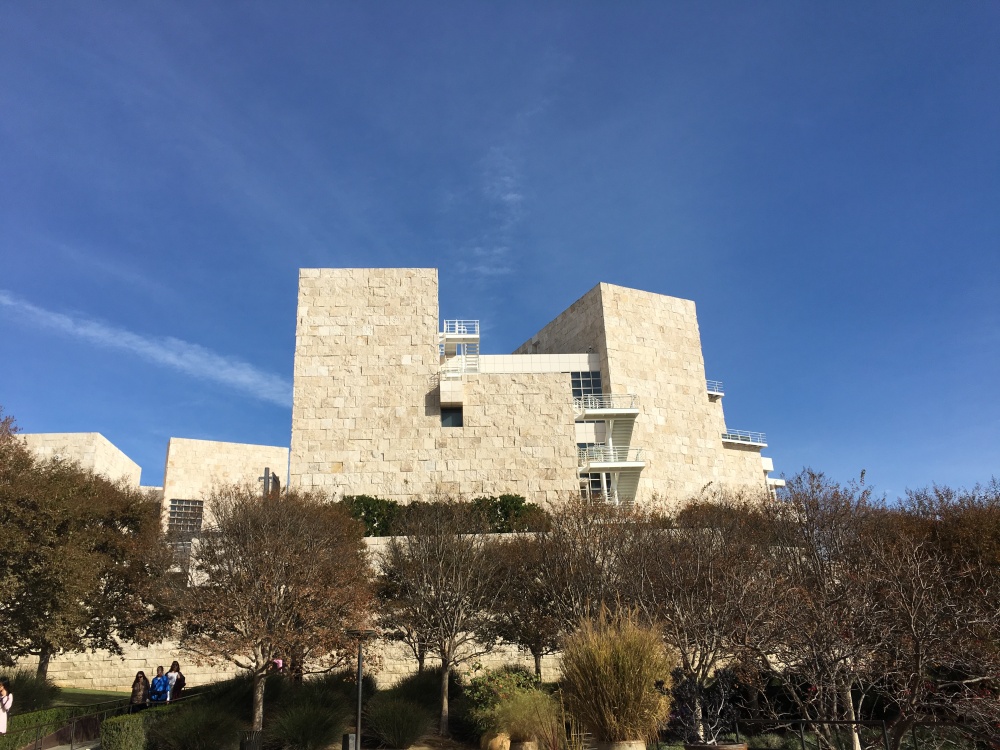 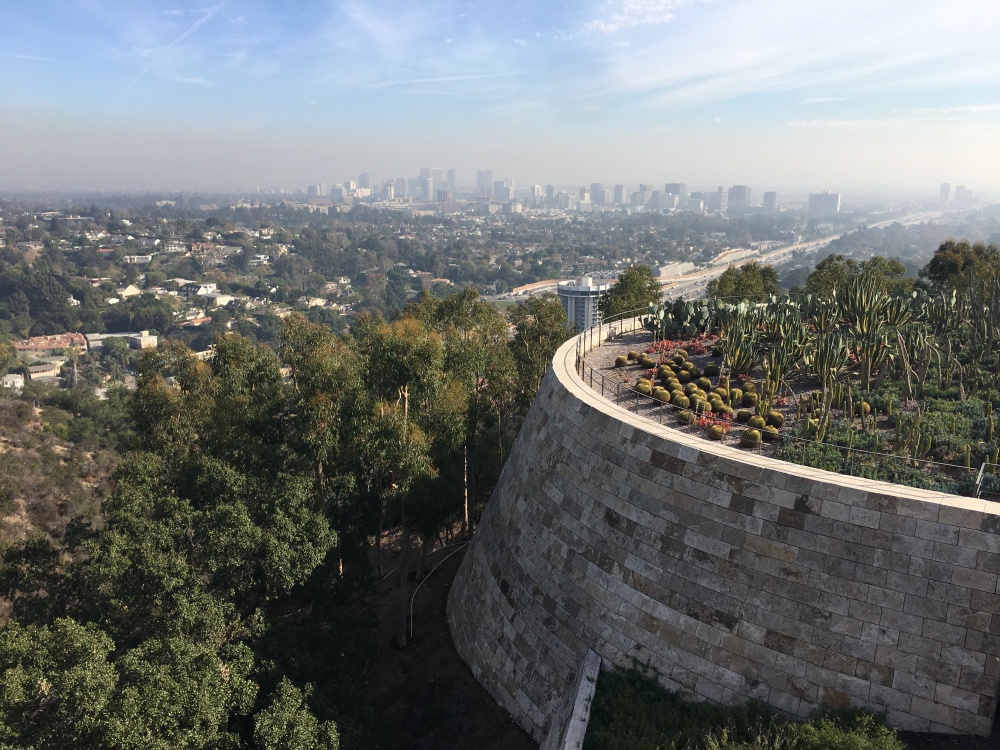 You may be wondering after all this lunch and dinner centric food, where does a hungry vegan get a slamming breakfast in LA.  If you’re still hanging out in Santa Monica, definitely make a point of stopping in at Dogtown Coffee (2003 Main St), a skate-surf hotspot, with great coffee, and a few vegan options on their menu.  The Vegan Munchies burrito while definitely satisfying your morning hunger pangs. 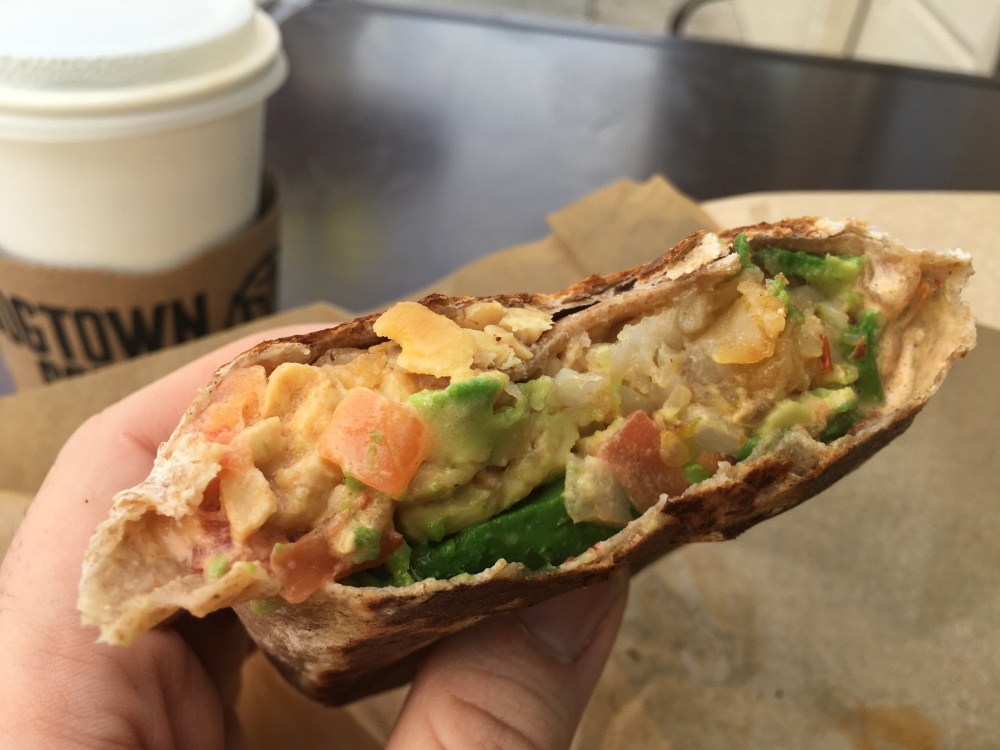 Another great breakfast option is The Grain Cafe (4222 W Pico Blvd).  Their massive menu includes crepes, pancakes, waffles, Huevos Rancheros and tofu egg dishes, all suffused with Mexican (specifically Oaxaca) inspired flavours.  I had the Waffle Deluxe, which included some veggie sausage and tofu eggs.  This was a really high-quality breakfast, at an incredibly reasonable cost.  In addition to their breakfast and brunch food, they also serve things like pizza, burritos, and salads! 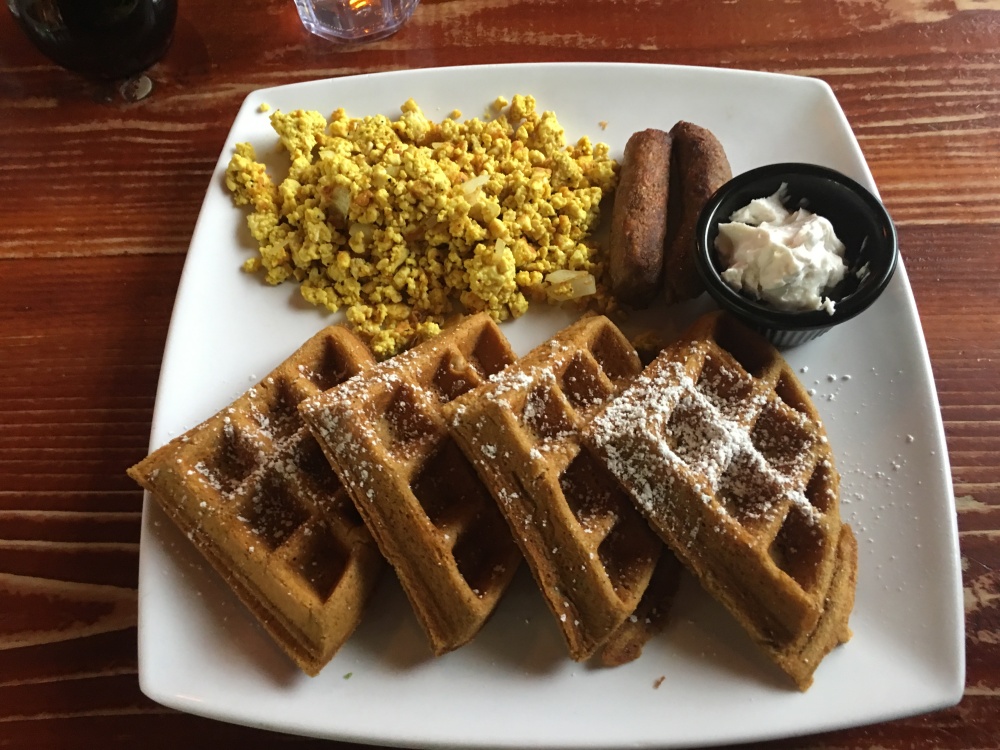 Some people may be hesitant about visiting Los Angeles – a city with such a ferocious and glitzy reputation, but I found myself continually taken aback by the peaceful and safe atmosphere that exists in even the busiest and sprawl-iest of its sections.  I can’t wait to go back again!